One important aspect to be focused on is the availability of financial means to the refugees. Only very few succeeded in transferring sufficient funds abroad in good time. In most cases, the anti-Jewish special taxes and foreign exchange legislation in Germany had ensured that by the time of arrival in the country of destination, the emigrants were destitute.1 Often, the emigration procedure had to be subsidised by aid organisations, relatives abroad or even the authorities of the German Reich, as is evident e.g. from the case of the Edinger family from Hann. Muenden. Among the emigrants from the region, only the Meyer brothers from Hann. Muenden had managed to transfer part of their assets abroad in time. However, this was at the price of public stigmatisation by means of a Steuersteckbrief, a warrant for apprehension due to unpaid tax on the transaction, and the resulting threat of being arrested. The entrepreneurs narrowly avoided such a fate by escaping to the Netherlands with their wives. From there, they later moved on to Britain, Brazil and finally the United States. Many of their family members, including sons and daughters, did not have the advantage of funds available upon arrival abroad. They had to begin anew by struggling their way through difficult conditions in the respective countries of destination.

"Vorzeigegelder" made an already precarious situation even harder

Governments of prospective countries of immigration knew about the refugees' often difficult financial situation. Intending to keep the number of Jewish immigrants as small as possible, they would only issue visas if proof could be provided of either existing financial reserves, guaranteed support from relatives or the presence of Vorzeigegelder (“show money”). The required amounts for the latter were fixed according to methods differing from country to country, and exacerbated the refugees' difficult situation even further. Thus, for example, for emigration to Palestine, the British authorities only issued category “A” certificates (the highest category, permitting immediate immigration) to those who could present proof of holding at least 1,000 British pounds. In many cases, having to keep such a sum on hand meant that the prospective immigrants lacked the reserves to transfer any funds according to the Haavara Agreement which would have made a new start in Palestine easier.2

Mostly, the refugees thus had no other option but to accept any available job, no matter how old or in what health condition they were. As starting wages usually were insufficient to make a living, it was sometimes necessary to have several jobs. The job markets in the various countries of destination were structured very differently. Often, the refugees' occupational training and experience had been in the field of business, so that they were confronted with a demand for job skills they had no knowledge or experience of. While in some countries, farming skills were in demand, domestic workers were needed in others, or people skilled in trades or technical professions.

Making ends meet with auxiliary jobs in the first years

People trained in the business field were rarely needed. The matter of language problems applied to all refugees, whether they arrived in New York, Buenos Aires or Cape Town. This needed to be resolved quickly; otherwise it was hardly possible to get a job. However, language courses costs money even before a source of income had been found, so that in many cases, the Jewish communities or relatives had to help out. Anneliese Rothstein from Gottingen, who was a qualified bank clerk, described her situation as follows:

"Upon my arrival in South Africa in 1936, it was impossible for me to find a position appropriate to my skills, as my knowledge of English was insufficient for what was required. In May 1936 I was thus forced to accept a position as a housemaid ... Due to the low pay, at the end of 1937, I assumed a position as a waitress at the restaurant of the "Jewish Guild"."3

Her subsequent jobs were as a cashier at a restaurant and receptionist at a hotel. Only in 1948 did Anneliese Rothstein get a job as an office employee which more or less corresponded to her qualifications.

The consequences of language deficiencies were particularly grave for school-age children. As they had mostly been forcibly removed from their familiar environment at very short notice, they were now faced not only with the need to establish new social contacts, but also with the task of coping with everyday life at a new school. Renate B. from Hann. Muenden, age 12 at the time, later described her problems in the following way:

"We left Muenden in the middle of the semester and arrived in California in January 1939. I soon attended school, but was placed in the class for retarded children, because I hardly spoke any English at the time. This way, I lost more than one year."4

Such difficulties were not without consequences. Many adolescent refugees failed to graduate from school, college or university, thus lacking the formal qualifications for professional careers they had desired, and making a complete re-orientation necessary.

Life in poverty after a successful escape

Many people who were elderly or ill were affected even more seriously. Numerous refugees reported that they suffered from physical and psychological after-effects of their odyssey. Men who had been interned by the Nazis after the November 1938 pogrom had been severely maltreated. However, illnesses and injuries could not be treated properly without adequate health and social insurance. Despite their disabilities, which in some cases were most severe, the people affected had to continue making a living performing hard physical labour. Those who were completely unable to do so were often provided with support from Jewish aid organisations. 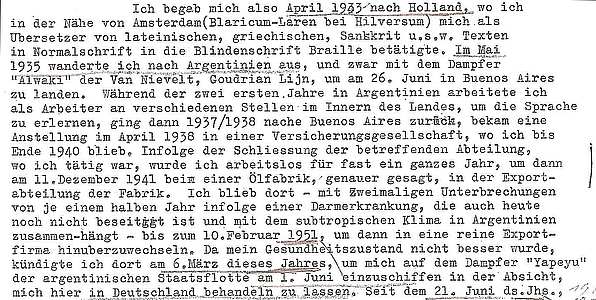 Besides the problems of finding jobs, adapting to unfamiliar climatic conditions and coping with resulting illnesses, there was the challenge of finding quarters for the whole family, partly in rather tense housing markets. In large cities and regional centres, it was thus of advantage to know other immigrants who had already established themselves and had useful contacts.

In some cities, centres of regional origin developed

Such contacts could be helpful in searching for a place of residence. This way, in some cities, districts developed which were populated almost exclusively by German-speaking Jews. Examples of this are Washington Heights in New York6 and Haifa in Israel. In the latter city on the Mediterranean, so many refugees from the Gottingen area moved into one district within just a few years that they would presumably have all met in the street nearly every day. Persecuted Jews had fled to Haifa from Hann. Muenden, Bremke, Gottingen and Dransfeld. Such a concentration occurred especially in Washington Heights, as described. However, from the Gottingen region, many Jews also emigrated to the New York boroughs of Bronx and Queens, as well as to Buenos Aires, though there not concentrated in one and the same city district.