Escape Routes across the Atlantic

The great majority of Jewish persecutees left Germany via the ports of Hamburg and Bremerhaven. The routes via Rotterdam, Antwerp or Le Havre also invariably began at the consulates of the respective receiving countries. Even though there were differences in the respective entry regulations, it was impossible for refugees to "officially" leave for foreign countries without a visa. There was one exception, though: Shanghai.

To control immigration, the United States allocated each country of origin an annual immigration quota. This quota resulted in a certain waiting time until candidates could emigrate. How problematic this practice became over the years specifically for Jewish emigration from Germany can be demonstrated by the fate of the Mosenthal family of Dransfeld. Ilse Mosenthal, who lived at her mother's together with her sister, in 1939 had been allocated the quota number 16,273 by the US Consulate General in Hamburg. This meant that she could only have emigrated to the US three years later. Clearly this turned out to be too late for her - in March 1942, she was deported to the Warsaw ghetto along with her mother and sister, and no further trace of them can be found in the available records.

To receive a visa as part of the immigration quota for Germany, the applicants from Goettingen travelled to the US consulate in Hamburg, which was in charge for the region. A number of Jewish persecutees from Hann. Muenden had their visas done at the Stuttgart consulate. The departure times for their passage overseas were often so close to the time they received their visas that further problems arose. The belongings they intended to have forwarded had to be packed and their transport paid for, and money had to be organised for a place to stay until their ship's departure. Due to the account freezes that were imposed from the second half of the 1930s, there were frequent delays in the release of required funds by the foreign exchange offices. In the worst case, this could mean that people failed to leave the country as planned.

After the beginning of WWII, only western European ports were still an option

Nevertheless, close to 140 persecuted Jewish from Goettingen and the surrounding area managed to escape to the US via Hamburg or Bremerhaven.1 Until the war broke out, the ships of Hamburg-Amerika-Linie and Norddeutscher Lloyd sailed regularly. Including the stopovers at Southampton or Liverpool, the journey took a good week. Once the war had begun, the emigrants switched to ports of departure in Germany's neighbouring countries to the west. Rotterdam, Le Havre, and especially Antwerp became the central points of departure for Jewish emigration overseas - until the Wehrmacht invaded the Netherlands, Belgium and France in May 1940. In autumn 1940, the Reich's minister of the interior authorised the German shipping lines to book passages with foreign lines for their passengers. 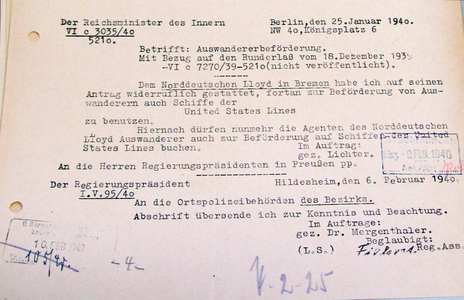 After the German armed forces had occupied Western Europe, the local Jewish population and those who had made it there from Germany were stuck. Until Italy entered the war in June 1940 as an ally of Germany, there still remained options for escape via the ports of Genoa and Trieste. These were mainly used by those who intended to emigrate to Palestine "the official way". In the UK, the majority of immigrants and transit passengers were interned as "enemy aliens". And whoever was still successful in the struggle for passage from Britain, the Netherlands, France or Belgium to North or South America was exposed to great danger on the way. Paul Meyer of Hann. Muenden had been interned as an "enemy alien" in England. Because of this, he survived the sinking of the ship he was to travel on by torpedoes from a German U-boat. He had intended to follow the rest of his family to Brazil after his release.

The last open routes across the Atlantic could only be accessed from the Iberian Peninsula. Until the late summer of 1941, refugees still managed to get to Spain and Portugal by rail.2 From Barcelona or Lisbon they crossed the ocean to the US or South America. Refugees from Lower Saxony, Jacob Faibuschewitz (Goettingen) and the Schwalm family (Hann. Muenden), also used the Iberian route on their journey. The formerly Goettingen-based shoemaker succeded in escaping to Lisbon as late as in August 1941 and securing passage on a ship which cast off to New York only a few days after his arrival. In mid-July 1941, Moritz, Sara and Henry Schwalm travelled from Berlin to Barcelona, from where they continued their journey – also to New York – on the 15th of the same month.

Emigrants whose destination was Australia or South Africa also travelled to their receiving countries by ship. Usually the ports of departure were the same as for those who were escaping to the Americas. Due to the boycott of his father's textile business, Otto Lowenthal of Hann. Muenden could no longer continue in his occupation as a travelling employee for the enterprise. Thus, in 1934 he went to Berlin, where he retrained as a metalworker. Just before the 09 November 1938 pogrom, he escaped to Britain and continued his journey on the Duchess of Bedford a few days later. His ultimate destination was Australia, but as he had booked passage with the Canadian Pacific Line, his next stop out of Liverpool was Montreal. From there, he embarked on the long trip to the fifth continent, where he settled down in Sydney and founded a family.

In the course of the 1930s, travel costs continued to rise

An even more arduous way of emigrating was to go to Shanghai in China.3 When after the Évian conference in summer 1938, most countries tightened their entry restrictions to such an extent that immigration almost ceased. Shanghai was the only place where the persecuted Jews needed shipping cards or passports for entry only. However, passage was very expensive, and the transfer of any belongings beyond immediate personal effects was possible only to a very limited extent. Richard Katz of Goettingen and his wife Else, who originated from Adelebsen, at the end of April 1939 departed from Hamburg to Shanghai on board the Usaramo, a steamer chartered by the Gestapo. Transporting over 400 passengers, the ship was extremely overcrowded. In contravention to what had been agreed, the refugees were not even permitted to use the washrooms.

Next page: Escape Routes via the Danube