Asia and Australia-Oceania were not among the favourite destinations persecuted Jews escaped to from the German Reich. This was also the case regarding refugees from southern Lower Saxony; only a few people ended up there. Long distances, high passage costs, climate and hygiene conditions as well as the frequently unstable political situation discouraged many refugees from travelling to the distant Far East.

When in 1938, most countries closed their borders to refugees from Germany, one place of refuge became significant which due to its remote location and precarious living conditions had hardly even been noticed before: the city of Shanghai.

After 1938, and until 1941, the Chinese city was the only place refugees could enter even without holding a visa. Consequently, the practice at the advice centres for emigrants was adapted: candidates were now encouraged to familiarise themselves with the idea of a long journey to the Far East. After the arrests in the wake of the November 1938 pogrom and the detention of most of the arrested Jewish men at the concentration camps of Buchenwald, Dachau and Sachsenhausen, the situation in the German Reich for their families became increasingly dangerous. The Gestapo and the SS demanded of the detainees to provide proof of their intended emigration, otherwise they were threatened with prolonged or renewed arrest. As the people concerned were often physically abused during detention, they were quite aware of the seriousness of their situation. Their family members thus continued to make every effort to obtain the papers required to escape. 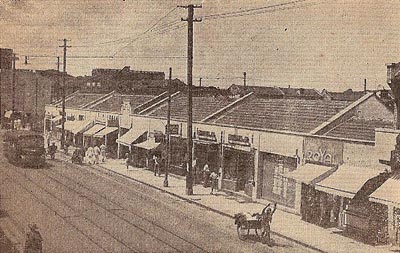 About 18,000 Jewish refugees from Central Europe, among them approx. 7,000 from the German Reich, proceeded to seek refuge from Nazi persecution in Shanghai. The city was divided into an International Settlement with separate administration by a Municipal Council where numerous British and US-businessmen and their families lived, a separate French sector, and Chinese districts. The latter as well as the district of Hongkou had been occupied by Japanese troops in 1937. During the Japanese invasion, Hongkou had been severely devastated, even though it was part of the International Settlement, as over 100,000 Chinese war refugees lived there.1

From Bremerhaven to Shanghai

In summer 1939, the Japanese occupants began to regulate unrestricted movement into the city, and established a Jewish ghetto in Hongkou in May 1943. Until the beginning of WWII, Jewish refugees could still travel from German ports to East Asia without restrictions. Thus, e.g. three passenger steamers of the Norddeutscher Lloyd shipping company travelled regularly from Bremerhaven to China. Once the war had begun, though, the large German shipping companies gradually reduced their overseas passages for safety reasons. Therefore, until summer 1940, refugees increasingly made use of the Italian ports of Trieste and Genoa. After then, the only escape route left was the Trans-Siberian Railway.

Oskar and Meta Katz – an example from the region

Many of these events and circumstances also affected Oskar Katz of Hannover. The cigar merchant had married Meta Proskauer from Hann. Muenden, he owned two successful tobacconist's shops in Hannover. However, in Hannover, just as everywhere in the German Reich, the situation for Jewish business owners deteriorated as soon as the Nazis assumed power. After sales had plummeted and problems had arisen with the non-Jewish landlord, Oskar Katz found himself forced to give up one of the shops. In 1936, at the age of 16, daughter Margot was sent to the United States. Marginalisation and physical abuse were phenomena experienced also by Jewish minors, so that many parents decided to send their children to stay with relatives abroad or to enlist them for programmes of aid organisations. 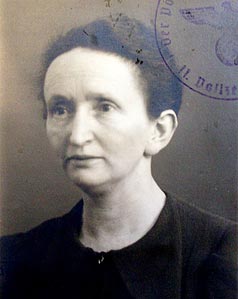 The period after the November 1938 pogrom, though, was the time when Oskar Katz realised what the full extent of the Nazis' anti-Semitic terror felt like. Between 11 November and 04 December 1938, the Gestapo kept him detained at the Buchenwald concentration camp. At the main railway station of Weimar, in the so-called Tunnel von Weimar, the SS maltreated Jewish detainees.2 Oskar Katz had his teeth knocked out by a rifle butt, "so dass ich bis heute keine Zähne mehr besitze".3 After his release, the Hanoverian businessman had little time left. He had been told in no uncertain terms by the Hannover Gestapo that he should "get out really quickly" if he didn't want to return to the Buchenwald camp. His second shop had already been compulsorily "Aryanised", i.e. sold off to a non-Jewish buyer for a pittance, and all household goods and furniture had to be flogged off hastily, for which the couple received no more than RM 160. Afterwards, they fled from Hannover to Hann. Muenden, the town of origin of Meta Katz. This did not mean, though, that the Hannover Gestapo's threat was no longer pertinent. A hard-line Nazi had become mayor of Hann. Muenden in 1937, so that many Jewish citizens had already left the town. Oskar and Meta Katz found shelter in a building which was still owned by the Proskauer/ Katz family. The time window for escape from the German Reich was closing fast, also because the financial means were disappearing: in spring 1939, all jewellery and other items of value had to be handed in at the pawn shop at Kassel.

Without visas, the couple only had two options left to them to escape. Either they crossed the border "illegally" to a neighbouring country, which would have required relatives living there, or at least contacts to an escape organisation, or they had to raise the funds for the expensive passage to Shanghai. In the end, Oskar and Meta Katz used what remained of their savings to pay not only for their own tickets, but also assumed the costs for Oskar's siblings in Hannover, who were practically destitute. They were lucky that Meta's brother in Hann. Muenden, Julius Proskauer, still had some reserves left which he put up to support the prospective emigrants. In late January 1939, passage on the steamer Scharnhorst was booked at the general agency of Norddeutscher Lloyd Bremen in Hannover. The invoice issued to Julius Proskauer for RM 8,270 indicates that just less than half the amount was a deposit which Proskauer, a dealer in second-hand goods, would supposedly get refunded once the group of travellers arrived at Shanghai and remained there.

The refugees lived in mass accommodation

Nearly another three months passed until all documents required for leaving the country had been gathered. The Scharnhorst cast off from Bremerhaven on 18 April 1939, with the five Jewish refugees from Hann. Muenden and Hannover on board.

How did these refugees fare after a sea journey of several weeks and in the unfamiliar environment of the Chinese port city? First, it was to their benefit that they were looked after by aid organisations such as the Hebrew Immigrant Aid Society (HIAS). 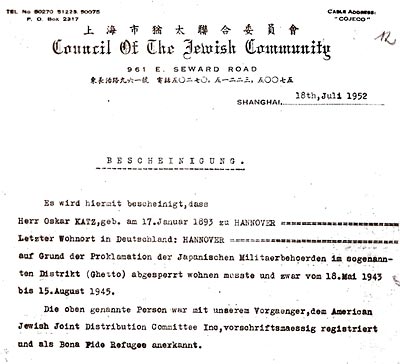 Otherwise, the search for quarters and organisation of food supplies would have been problematic. Most of the refugees admitted to the International Settlement lived in mass accommodation. Although there was no privacy to be had, at least people had access to communal catering. Nevertheless, the conditions in the housing district were anything but pleasant. Hygienic conditions in the war-torn city were far from what the refugees had been used to in Germany. Also, the extreme climate with heat and high humidity were rather strenuous.

These conditions left their mark also on Oskar and Meta Katz. Oskar's state of health, which had already been fragile after the short but extremely brutal period of detention at the Buchenwald concentration camp, deteriorated even further in Shanghai. Due to his extremely bad eyesight, he was unable to find any job during their entire stay in China, and without an income, he was unable to improve their situation of having to live in mass accommodation in Ward Road. Further, once the Japanese occupants had closed off part of the International Settlement on 18 Mai 1943, the couple could no longer leave the ghetto formed by this act. 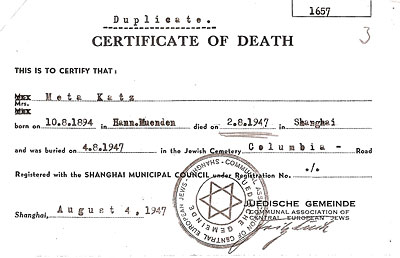 Although there can certainly be no comparison between the living conditions at Hongkou and those in the Jewish ghettos in German-occupied Eastern European countries - there was a certain degree of freedom of movement, and the refugees' lives were not under constant threat from SS guards - the situation was nevertheless such that hygienic conditions caused illness and contagious diseases. Meta Katz fell so seriously ill in the end that she died in Shanghai in 1947. A short while later, their daughter Margot Katz succeeded in bringing her father Oskar to the United States.

About 9,000 Jewish refugees in total escaped from the German Reich to Australia. Until 1938, the conditions for acceptance there were highly restrictive, whereupon the government introduced a quota of 5,000 to be permitted entry. Due to the beginning of the war soon after and the associated dangers of the long sea passage, the quota was never filled. Additionally, as a British dominion, Australia was participating in the war effort, which meant that German refugees were considered enemy aliens.

Consequently, not many Jewish citizens from the Gottingen area are known to have immigrated to Australia, either. One of those few was Otto Lowenthal from Hann. Muenden. The son of textile merchant Hermann Lowenthal moved to Berlin early, in 1934, as in his home town, due to the political situation, there were no prospects of successfully taking over the business from his father. In the Reich's capital, he trained as a metalworker at a hakhshara establishment, after which his intention was to immigrate to Palestine. This plan would not be implemented, though.

For reasons unknown, the intended departure to Palestine was delayed, but unexpectedly, Otto Lowenthal found employment as a welder at a Berlin metal ware factory. He continued to live at the hakhshara training facility in Niederschoenhausen, though, so he was constantly confronted with other Jewish persecutees' plans for emigration. It is thus highly likely that his decision to emigrate was made at an early point. After having worked as a furnace-man at the Juedisches Altersheim ("Jewish Old People's Home") in Berlin for a further half a year, he left Germany in early November 1938, before the large-scale pogrom took place that month.4

Hermann Lowenthal had run the textile business from the store in Lange Straße 63 in Hann. Muenden for over 50 years. Because of the boycott against Jewish-owned business, sales which had been achieved by the father's and son's intensive travels throughout the region, collapsed completely. Until his death in 1938, the elder Lowenthal continued to live in Gottingen on his savings. Otto Lowenthal's three sisters, Irma, Lilly and Kaethe, were deported from Kassel and Duisburg in 1941 and 1942, to the ghettos at Riga and Warsaw. Irma Golnick, née Lowenthal, survived the Riga ghetto and the Stutthof concentration camp. In 1945, she returned to Hann. Muenden for a short while to investigate the fates of her family members. Upon her return to Kassel, the local Red Cross informed her that her sons had been liberated in Riga by the Soviet Army, while her husband and daughter had been murdered at a camp shortly before its liberation. Only at the end of the 1950s, her sons, adults by then, were released to join their mother living in Kassel.

By then, Otto Lowenthal had completed a long journey. Upon escaping to Britain from Germany, he boarded the steamer Duchess of Bedford at Southampton only a few days after his arrival. He had heard that the policy of accepting refugees in Australia had been relaxed, so instead of pursuing his original plan to immigrate to Palestine, he obtained a visa for the Fifth Continent. His training and work experience in the metal industry were of advantage in the vetting procedure. After arriving at Montreal in Canada, Otto Lowenthal had to cross the American continent by rail to reach Vancouver on the Pacific coast. There, he boarded the SS Aorangi en route to Sydney. After this journey across half the globe, Otto Lowenthal settled down in Sydney, where he worked as a welder until 1946. Afterwards he started his own business manufacturing belts and buttons.

Next page: Conditions in Exile