While Jewish civil servants were dismissed from their positions to a great extent already in April 1933 pursuant to the "Gesetz zur Wiederherstellung des Berufsbeamtentums" ("Law on Reconstitution of the Civil Service System"), the situation among employees in the private sector was more complex. Many non-Jewish employers decided to go along with the stipulations of the new civil service law and sacked their Jewish staff, although they were not legally obliged to do so. Other employers retained them as long as it was possible. Any jobs with Jewish employers were lost as soon as their enterprise was "Aryanised", i.e. expropriated and sold cheaply to a non-Jewish buyer.

By late 1937, most Jewish employees had been sacked. From within medium-sized and larger businesses, operatives of the NSBO1 exerted pressure on employers. In their agitation against Jewish employees, they used the "argument" that it was unacceptable to "Aryan" colleagues to have to work alongside Jews. Retailers and crafts business owners yielded to what was the popular viewpoint at the time. Many were afraid to attract the attention of SA groups or to lose anti-Semitically inclined customers. The only option for most Jewish employees was thus to find employment with a Jewish-owned business. However, the further the "Aryanization" process progressed, the less this last option remained viable. By early 1938, only very few Jews were still in employment in Goettingen and the surrounding area.

The differences in the practices of non-Jewish employers can be shown clearly by the example of a Jewish brother and sister in Goettingen. In 1933, Gertrud Faibuschewitz worked as a sales assistant in a department store of Rudolf Karstadt AG in Groner Strasse in Goettingen. At first the Nazi takeover in Germany on 30 January 1933 did not directly affect the young woman. At over 150 Reichsmark, her salary was average for an employee. Under less unfavourable circumstances, she might have had the opportunity to be promoted to department manager due to her training as a qualified salesperson for the textile trade. This was now impossible under Nazi rule. By summer 1933, her contribution to the business was no longer desirable. With good references as a ticket to an uncertain future, Gertrud Faibuschewitz was dismissed. She immediately left Germany and escaped to Paris.2 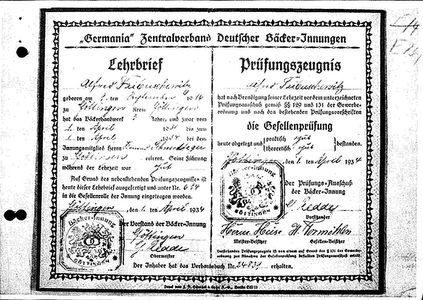 As late as in February 1934, her younger brother Alfred Faibuschewitz still managed to pass his final exam as a baker's apprentice at the Goettingen municipal vocational school. He completed his practical training with master baker Konrad Schwertfeger in Goetheallee. Until 1938, there were no official directives regulating the training of Jewish apprentices, though from 1935, the Chamber of Industry and Commerce urged the businesses that took on trainees to stop admitting Jewish young people. Thus in 1934, Alfred Faibuschewitz still received his journeyman's certificate from the central organisation of bakers' guilds, named "Germania". Konrad Schwertfeger continued to employ the young baker for a further two years as a journeyman. Even after a short internship period in Kassel, Alfred Faibuschewitz returned to the bakery he had done his training at. Only more than a year later, Schwertfeger felt compelled to issue a letter of reference. It is quite obvious from the wording of the letter that he was not pleased about needing to dismiss his journeyman. Pressure from the guild to sack his employee had however become too great.3

Two enterprises in Goettingen employed several Jewish trainees and staff who could no longer find a job elsewhere. Max Simon, Jewish co-owner of Bankhaus Simon Frank OHG managed to continue in business until summer 1938.4 One reason for this was that the bank had its offices in a building in Theaterstrasse 25 which at that time still belonged to Jewish merchant Alfred Rosenbaum of Rosdorf. This meant that Max Simon was at least temporarily safe from termination of the lease agreement for his rented premises. Until the bank was shut down, several Jewish trainees and staff worked there, among them the landlord's son, Kurt Rosenbaum. Already since 1925, Anneliese Rothstein had been an employee of the bank. She had attended the Goettingen Lyzeum (grammar school) and then begun her training at Bankhaus Frank. By the time the Nazis assumed power she had risen to the position of accountant for current accounts, and thus become a person of trust to the owner of the bank. But the political situation in the German Reich was a serious obstacle to Anneliese Rothstein's further professional career. Additionally, she was frequently blackguarded by SA and Hitlerjugend members. On 20 September 1935, she therefore requested a letter of reference from Max Simon. Ms. Rothstein had decided to emigrate to South Africa. In mid-January 1936 she left Goettingen, and reached the South African port of Durban two weeks later. Anneliese Rothstein finally settled down in Johannesburg.

Treated with hostility by a teacher

Heinz Pohly of Goettingen only joined Bankhaus Frank when Ms. Rothstein had already moved to Johannesburg. While attending the Oberrealschule (historic type of upper secondary school, the school nowadays located in the building is named Felix-Klein-Gymnasium) he was subjected to his class teacher's hostility and physical assaults by some other pupils. To remain at the school seemed unbearable, so in 1936, he began a banking traineeship, but was unable to complete it. Before his training period was over, Bankhaus Simon Frank was "Aryanised". Heinz Pohly now neither had a secondary school degree, nor a vocational qualification. He therefore retrained as a metalworker at a redeployment centre of the Reichsvereinigung der Juden in Deutschland (Reich association of Jews in Germany, RVJD) in Berlin. He left Germany with his parents in the spring of 1939. The Pohly family emigrated to Argentina via France, finally finding a new home in Buenos Aires.

Non-Jewish proprietor could not take over well-qualified employee

Richard Graefenberg was another employer who made an effort to provide young Jewish people with job opportunities - at least as long as he still could. His textile store was in an excellent location in Goettingen's city centre. As he lived in a so-called Mischehe (mixed marriage), meaning he had a non-Jewish wife, he was permitted to maintain his store longer than other Jewish business owners. Max Rothenberg from Goslar had worked at Kaufhaus Louis Graefenberg since 1926. By the time the Nazis assumed power, he had reached the position of head buyer of the fashion house. Additionally, he was acting general manager with power of representation when Richard Graefenberg was on business trips. When in 1936 his Jewish employer was forced to sell his business, the new non-Jewish owner actually wanted to keep employing Max Rothenberg as a well-qualified and appreciated salesman. 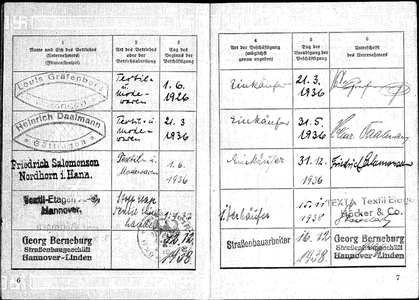 His intention was interfered with by the Deutsche Arbeitsfront, which pushed for the dismissal of all Jewish staff as a precondition for acquisition of the business. This dismissal was not the first blow for Max Rothenberg. As an excellent artistic gymnast of the club TSV von 1801 Goettingen, before 1933 he had good prospects of joining the German national gymnastics team. Once the Nazis were in power, the Deutsche Turnerschaft (German gymnastics association) decided that Jews should no longer have membership in German gymnastics clubs. By resigning in style from the club voluntarily, Max Rothenberg preempted his dismissal from the association. After he had been sacked from his job at Kaufhaus Graefenberg, the father of a family continued to work in various places in northern Germany for some years, before he and his family emigrated to the US in 1939 on quota visas.5

After their employers went out of business, most Jewish employees left the German Reich

In 1933, Graefenberg's had a staff of approx. 60 employees.6 The greater part was most likely of Jewish origin. One of their trainees was Siegfried Goldschmidt from Peine. He had begun his training as a commercial clerk at the company in 1931, and successfully taken his final exam in 1934. Afterwards he continued to work for Graefenberg's and specialised as a buyer and seller of carpets and curtains. When the business was forcibly sold, Siegfried Goldschmidt decided to leave Goettingen, well aware that any further employment by the non-Jewish successor was unrealistic. For a short while, he found employment as a salesman near Bremen, and then left Germany for good in 1936. Via the UK, he also emigrated to the US. In Goettingen and the surrounding area, there were only a few Jewish-owned companies of the size of Kaufhaus Graefenberg. The fate of their Jewish employees is so far mostly unknown. In most cases the trainees doing their training there intended their periods as trainees/apprentices and journeymen to be a transition into self-employment or management of shops or businesses owned by their families. For some time, their own income and the existence of their family's business were thus guaranteed. But in general, at the latest after 1937, also the descendants of Jewish merchants chose to emigrate. This was the only way to escape Nazi terror and a complete lack of prospects in Germany in their profession and in life on the whole.