You are here: English Version » Persecution » Withdrawal of Citizenship
Print version of:
https://juedische-emigration.de/en/emigration/escape-routes/escape-routes-via-the-danube.html

Escape Routes via the Danube

The "illegal" transports to Palestine by ship are a very particular aspect in the history of Jewish emigration. Several Jewish groups organised the escape via the Danube, as the administration of the British mandate of Palestine refused to permit higher immigration quotas for the region, even after the November 1938 pogrom.

Agents of Jewish secret intelligence organisations, such as the Mossad, had set up contact offices in Prague and Vienna. To get travel documents issued and boats on the Danube chartered, it was necessary to cooperate with officials of the Reichssicherheitshauptamt (Reich Main Security Office). A further relevant institution involved was the Zentralstelle für juedische Auswanderung (Central Office for Jewish Emigration) in Vienna, headed by Adolf Eichmann. In Berlin, it was assumed that mass immigration of Jews to Palestine would lead to a destabilisation of the region, which would be a blow to British power. Thus, on the basis of this unusual "cooperation", six transports via the Danube were organised between spring 1939 and autumn 1940, of which one failed to reach its destination.

The majority of passengers were persecuted Jews from Poland, Danzig, Czechia and Austria. Many Jewish youngsters were part of the Zionist-socialist Hechaluz movement. In Hakhshara training establishments, they prepared for Aliya, for immigration to Palestine.1 At retraining facilities and on farming estates, they had the opportunity to be trained in occupational skills that would be in demand there. Margot Meyerstein of Bremke was also among those who joined up. In 1937, at the age of 14, she had been pushed into abandoning her school education due to constant bullying from an anti-Semitic teacher named Renziehausen. She then worked as a housemaid in Gottingen for two years. In 1939, she joined a Hakhshara facility run by the Hechaluz in Hamburg-Rissen.2

There, she stayed for over a year. When more and more of the retraining facilities had to be shut down due to the ever greater pressure of anti-Semitic persecution, and regular emigration became almost impossible, the Hechaluz leadership and those in charge at the Palaestina-Amt in Berlin decided in June 1940 to move a larger group of emigrants to the "Promised Land" without British entry visas. The adolescents were supposed travel to Romania on the Danube via Vienna and Bratislava, then transfer to chartered freighters and reach the coast of Palestine via the Black Sea and the Bosporus. The further plan was that they would be met there by members of the Jewish underground organisation Haganah, brought ashore "illegally" and distributed to various kibbutzim. However, organisational problems occurred already shortly after their departure, and the group was stuck for over a year.

From Hamburg-Rissen, six adolescents, four girls and two boys, had been selected for an "illegal" transport to Palestine. Among these was Margot Meyerstein. Once the youngsters had bid their parents and siblings farewell in their home towns, they waited in Hamburg for departure. They had to take care of the passport and customs formalities themselves. New difficulties kept appearing in the organisation of the journey, such as chartering ships and obtaining transit visas from the Palaestina-Amt, so the departure had to be delayed. Then, in early August 1940, the news came from Berlin: the train would depart from Berlin to Vienna on 14 August. The Gestapo was participating in the organisation of the transport. As Adolf Eichmann was personally involved, the group that assembled in Berlin, over 100 people by then, was under constant supervision by Gestapo officers.

On 30 September 1940, the young people could finally board the Danube steamer Uranus and set off on their journey to Palestine. A total of 600 youngsters who were all part of the Jugend-Alija had departed from Vienna in coaches. In Bratislava, a further 500 Jewish detainees joined them, for whom accommodation also had to be found on board the Uranus. The Slovak government had made taking them along a condition for issuing transit visas. Progress along the Danube was swift. Life on the boat was strictly regulated by the Jugend-Alija's organisation, and supplies were provided by the crew. Such a relatively smooth journey on the river was an exception. The fate of the so-called Kladovo Transport, which got stuck in ice in the winter of 1939/1940, was especially bitter. The refugees were interned in Serbia, and when the German Wehrmacht occupied the country, they were deported to extermination camps. The Uranus, however, after less than a week reached the Romanian port of Tulcea in the Danube delta, where three Greek ships were waiting for the group to continue on their journey.

Two small trawlers and one passenger liner to accommodate over 4,000 people

The vessels provided were the Milos and the Pacific, two larger fishing trawlers (with a displacement of 600 and 700 tons respectively) and the Atlantic, which could take on about twice as many people as the trawlers. About 4,000 refugees had to be crammed onto these three boats. Over 1,000 people who had been aboard the more spacious Uranus now had to squeeze onto the Pacific together. While waiting for the boats' crews to arrive and supplies to be loaded, but also to make the vessels safer and more seaworthy with such a huge number of passengers aboard, the young Aliya pioneers built bunk beds and installed cooking facilities. After almost a month's waiting in Romania, the journey continued across the Black Sea. 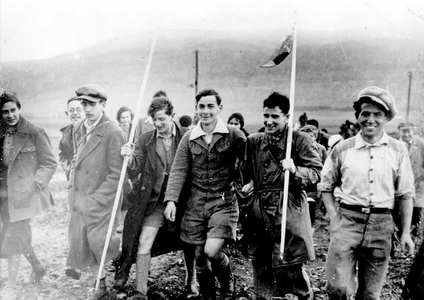 During the sea transports across the Black Sea, through the Bosporus, Dardanelles and the Mediterranean to Palestine, numerous accidents happened. Many people lost their lives on the way. In the early years of WWII, this was the usual escape route for Jewish families from Eastern and South Eastern Europe. The available ships were mostly far from seaworthy. It had become increasingly difficult for Jewish organisations to charter vessels and crews, as the British government was intensifying its pressure on Greece and Turkey to prevent the transports. The journey of the Pacific, Milos and Atlantic was not without complications, either. There was damage from a storm that had to be repaired, and new supplies procured and loaded. During a stopover in Bulgaria, the government exploited the refugees' precarious situation by forcing them to accept a further 40 Jewish emigrants on board in exchange for provisions. The ships' crews went on strike and only agreed to continue the journey for higher pay. Nevertheless, up until the Mediterranean, progress was comparatively easy - the three boats were neither shot at with torpedoes, nor did they sink in a storm, as it happened to other refugee transports.

Only once the group from Hamburg had arrived at Haifa, a dramatic event took its course. Before they could even come ashore, the British administration of the mandate took the refugees into custody, intending to transfer all the passengers from the three boats to Mauritius. The British administration in Palestine wanted to make concessions to the Arabian part of the population, who had risen up against Jewish immigration in 1936. The officials in charge were just waiting for the arrival of the completely overcrowded Atlantic. 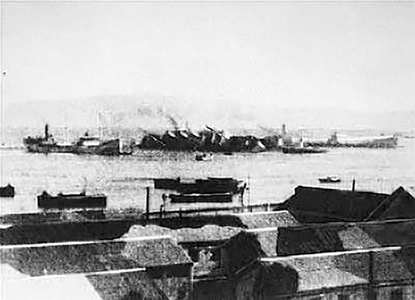 Only the very old and those unfit to travel any further were to be allowed to stay, and all others to be interned on the seized French freighter Patria. The refugees from Hamburg were among the latter group. To prevent the ship's departure and thus the deportation of the Jugend-Alija members, the Haganah planned to plant an explosive device on board. The activists intended to blast a hole in the hull to stop the Patria from setting off. By mistake, too much explosive was used, so that the leak was too big and the ship sank too quickly.

The Hamburg group including Margot Meyerstein were lucky to be rescued

The group that included Margot Meyerstein was also on board of the ship. After the detonation, they were lucky to be situated on the side of the Patria which was above the waterline, as the ship didn't sink completely in only 12 metres of water depth. The young people kept climbing towards the uppermost toilet cubicle, the water rising behind them, and managed to draw attention to their situation through a hatch. A rescue crew heard their shouts and pulled them out onto the hull of the ship, which had settled on one side. Upon their rescue, all survivors were interned by the British authorities in the camp Athlit. Only several months later, the refugees were released. More than 250 people had died in the incident. Many of the persecutees seeking refuge in Palestine did not survive the journey down the Danube and across the Black Sea. Despite all the dangers, one of numerous refugees who tempted fate, went on this route and succeeded was Lothar Heilberg. The young man used to live in Bovenden (in the Gottingen district) and worked for a Gottingen construction company. Close to a year before Margot Meyerstein, he also successfully escaped to Palestine via the Danube route. He was also interned at camp Athlit, and worked as an auxiliary policeman and translator for some time. Once the period of the British mandate had ended, Lothar Heilberg settled down in Israel permanently.

Next page: Escape Routes via the Iberian Peninsula