Until WWII broke out on 01 September 1939, there were still numerous possibilities of escaping from Germany. However, one of the problems was to manage to find the appropriate route at the right time, as both the Nazi authorities and the receiving countries kept changing the regulations to reflect their respective policies.

Usually, a visa for a receiving country was sufficient to obtain the required German documents for emigration. Until 1937, the British government allocated quotas for immigration to Palestine, and South American countries and South Africa also admitted Jewish refugees under specific circumstances. In these three cases, it was necessary to travel to the receiving country by ship.

Many refugees found shelter in the German Reich's neighbouring countries

Many persecutees initially fled to neighbouring countries of Germany to find shelter and support from friends or relatives. They either travelled by rail or crossed the border "illegally" on foot. Part of them continued their escape overseas, while others stayed and managed to survive underground after German occupation in 1940. Yet all too many of those who remained were discovered, deported and killed. 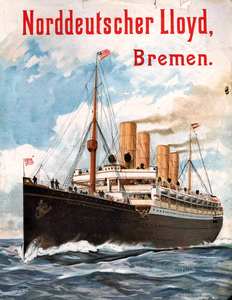 Most of the Jewish refugees from the Goettingen area succeeded in getting a number allocated for the German emigration quota to the US. The first stage of their route was Hamburg or Bremerhaven, where they received their visas from the US consulates and the ships of Norddeutscher Lloyd and the Hamburg-Amerika-Linie departed from. During the second half of the 1930s, numerous refugees also travelled via the western European ports of Rotterdam, Antwerp und Le Havre. After 01 September 1939, though, the situation became much more complicated. Once Britain had entered the war and begun its naval blockade against the Reich, the routes via German ports were practically eliminated. Until 1940, it was still possible to leave via Italy, as ships continued to regularly depart from Genoa or Trieste to Palestine and more distant overseas destinations.

During that period, institutions such as the Jewish Agency also organised "illegal" transports on board the vessels of the Donau-Dampfschiffahrts-Gesellschaft1 to Romania, and then on to Palestine. The path to Asia, where for some time no visas were required to enter the "open port" of Shanghai2, was either through the USSR via the Trans-Siberian Railway, or by ship on a long and complicated passage. Finally, the last remaining "official" option until 1941 was the escape route by rail from Berlin via France and Spain to Portugal and from there overseas by ship. On the following pages, some shipping routes as well as the land route across the Iberian Peninsula are described in greater detail. 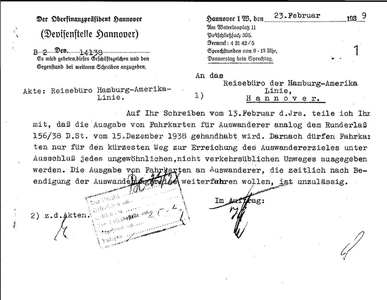 Next page: Escape Routes across the Atlantic