During the period between 1933 and 1941, more than 60 percent of the over 550,000 Jewish Germans who had been living in Germany at the beginning of Nazi rule, succeeded in escaping to safety abroad. In this, their choice of receiving countries depended on the respective immigration regulations.

After WWII had begun, once the Jewish persecutees had managed to leave the German Reich, it was often necessary to continue their journey overseas to remain outside the rapidly growing German sphere of influence in Europe. One major problem was the frequently changing immigration policy of the potential receiving country.

Three main phases of the exodus of German Jews

In the first years after the Nazis had assumed power in 1933, emigration to Palestine was still possible without any serious restrictions, there were still relatives in Germany's neighbouring countries that could provide support and shelter, and one could obtain an immigration visa for the US as part of the quota for Germany. However, from the mid-1930s, the British administration of the Palestinian mandate as well as some South American governments tightened the restrictions on immigration quite considerably. While in case of the British colonial administration, concerns about an Arab uprising in the Middle East were growing, the UK itself continued to accept numerous refugees up until the war began. Due to perceived labour market problems and fear of Nazi espionage in Britain, political resistance against taking in refugees from Central Europe kept rising.

Visa requirement and ban on working made emigration more difficult

In France, Belgium and the Netherlands, introduction of a visa requirement in connection with a ban on working was intended to discourage refugees from coming to these countries. Concerned about their economic stability, potential receiving countries such as Brazil or Argentina demanded Vorzeigegeld (show money) or Landungsgeld (landing money), whose amounts would demonstrate that the Jewish immigrants were to a certain degree affluent. Thus, concern about the social situation in potential receiving countries was used as a pretext for increasingly restrictive immigration policies in general. Then, in spring 1938, the Anschluss of Austria by Nazi Germany caused an outright crisis. Although until then nearly half the German Jews had already left the Reich, the annexation and administrative inclusion of Austria resulted in the situation that suddenly the proportion of the Jewish population was once again as high as it had been in 1933. Voices within the NSDAP calling for stricter repressions against Jews unwilling to emigrate became louder. In reaction, the party organisations in charge then established the Zentralamt für juedische Auswanderung (Central Department for Jewish Emigration) in Vienna, with Adolf Eichmann as its head. The Jewish population of Vienna was presented with the options "emigration or expropriation and internment in a concentration camp". After the November 1938 pogrom, this model was adopted for the entire Reich. 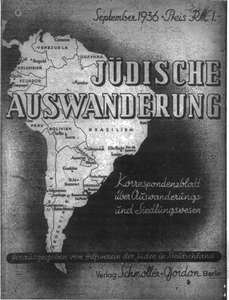 Among the international community, there was definitely an awareness of the refugee problem complex in the German Reich. At the Évian Conference in July 1938, however, the representatives of the participating countries found no solution to the problems. Subsequently, the governments of many countries made immigration even more difficult, so that to the aid organisations, only very few options remained where refugees were still accepted. Once WWII had begun, there was the additional problem of finding safe escape routes as well as organising ships for the crossing.

Attempts at an international regulation failed

After October 1941, Jewish emigration from the German Reich came to an end when Jews were officially forbidden to leave the country. The following pages are intended to describe how conditions in the receiving countries developed and how individuals reacted to the progressively severe difficulties after all efforts at finding a comprehensive solution to the problem of the refugees had failed.

Next page: Europe and Palestine