Two aspects of the Reich's foreign exchange policy, which can only be classified as anti-Semitic for the period of Nazi rule, had a direct impact on Jewish emigration. The focus of interest of foreign exchange control departments at the upper-level financial authorities was on the financial assets of Jewish persecuted intending to emigrate. These departments were also involved in implementation of safeguard ordinances pertaining to accounts and security portfolios. By means of controlling payment transactions, Jewish emigration was obstructed considerably.

Foreign exchange offices had been established by the financial authorities already in 1931. After the Reichsfluchtsteuer had been imposed by the cabinet of Chancellor Bruening, a supervisory authority was required, as the transfer of Reichsmark abroad was subject to official approval from then on. After 1933, the ministerial authority in Berlin successively expanded foreign exchange control considerably. The transfer of competence to the level of the federal states, i.e. to the upper regional financial authorities (Oberfinanzpraesidien, OFP), appears to have resulted in a particular kind of dynamism. While initially, these upper-level regional authorities were merely in charge of collecting the special taxes imposed on Jews, in the second half of the 1930, their staff increased significantly due to the establishment of separate surveillance departments. The customs service and the police also profited from the expansion of financial control.

Many of the directives in direct connection to Jewish emigration were issued by the Reich's Ministry of Economy. They referred to the deposits of emigrants, frozen savings accounts of Jewish clients at local savings banks or banks in business nation-wide, and the emigrants' belongings they intended to take along with them. 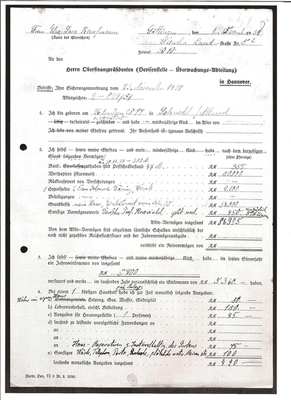 To most Jewish emigrants, the stipulations of the foreign exchange law of 1934 and its amendment of 12 December 1938 were of enormous importance. Additional obstacles were the directive on foreign exchange regulation of 22 December 1938 as well as the circular decree No. 16/39 issued by the Ministry of Economy on 23 October 1939.

The foreign exchange law and the directive, each in its respective section IV, tightened the prerequisites for Jewish emigrants. Thus, e.g., all items beyond effects for personal use which were to be taken abroad had to be registered and their transport approved by the foreign exchange office.1 This regulation applied exclusively to Jewish travellers. It is quite feasible to call this a "means to exploit Jewish emigration as a source of income for the state"2 Instruments of such exploitation were the Reichsfluchtsteuer, the freezing of financial deposits of emigrants, freezing of security portfolios and taxation of belongings to be taken along. What degree of intensity the surveillance of the department in charge at the OFP Hanover attained can be seen in the example of Max Rothenberg. He had come to Goettingen as a young man, completed his training at the textile store of Graefenberg in Weender Straße and was taken on there as a manager.3 After leaving Goettingen to assume a position with a Jewish merchant in Nordhorn, western Lower Saxony, Max Rothenberg attracted the attention of the customs investigation office at Lingen. As Nordhorn is close to the Dutch border, he was suspected of illegally transferring currency abroad.

In the end, intensive research by two customs investigators merely revealed an insignificant violation of the currency exchange regulations when crossing the border. Visits to a neighbouring country are commonplace in a border area, then as it is now. To go shopping, only small amounts of money were changed into foreign currency. A recent change in the regulations was unknown to Max Rothenberg, so it happened that he committed a violation. Even the surveillance department in Hanover classified this as a minor offence and imposed a small fine. The costs for the work of the two customs investigators proved to be significantly higher than the fine for Max Rothenberg. 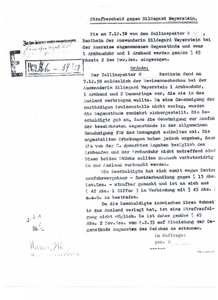 Hildegard Meyerstein of Bremke found herself in a similar situation. When she escaped from the German Reich to the Netherlands in January 1939, she was also inspected by customs investigators. In this case the officials were from Bentheim, a place on the border, and the central customs office at Nordhorn was in charge. The latter had to act in coordination with the surveillance department of the OFP Hanover. When Hildegard Meyerstein wanted to cross the border, the officials found that she could not produce an export permit from the foreign exchange office at Hanover for her wrist watch and a bracelet, i.e. personal jewellery items.4

Clearly, the "offence" was insufficiently serious to deny Hilde Meyerstein the crossing to the Netherlands. Instead, the customs investigators simply confiscated the items. As it was impossible to prosecute the young woman after her escape, the foreign exchange office refrained from pressing charges. Ultimately, also in this case, the aim was none other than to loot "Jewish assets".