You are here: English Version » Donations
Print version of:
https://juedische-emigration.de/en/persecution/professions/merchants.html

In 1933, the largest occupational group among the Jewish population of the German Reich were independent business owners. This also applied to the situation in southern Lower Saxony. In the small towns and villages of the region, close to 100 percent of Jewish families were merchants and traders, sometimes with a few additional employees.

In the cities of Hann. Muenden, Duderstadt and Dransfeld as well as the university city of Goettingen, there was a higher degree of differentiation between occupational groups. Nevertheless, shop and small business owners represented the largest segment, before academics employed by the university, employees, self-employed professionals such as lawyers, physicians, brokers, etc., and the group of workers.1 However, due to progressive social marginalisation effected by the Nazis and their boycott policy against Jewish business owners, the group of persons in dependent employment among Jewish citizens grew significantly over the course of the 1930s.

Jewish-owned shops had mostly been expropriated by 1937

Once all Jews had been excluded from business life by the end of 1938, the entire investigated area was affected by this development.2 In the region, among the group of merchants and traders, Jewish textile and manufactured goods merchants represented the largest segment, followed by agricultural products merchants. Livestock merchants and lawyers were also present in nearly all larger villages and towns in the area which today forms the administrative district of Goettingen. Jewish-owned businesses with more than 30 employees were fairly rare, as they were under particular pressure from persecution by Nazi party organisations. 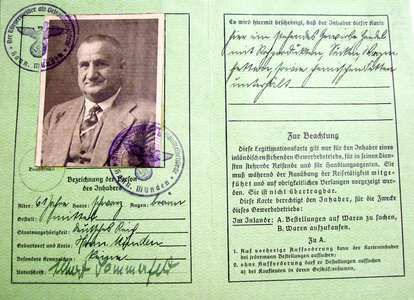 In Dransfeld, already before the years of Nazi rule, Jewish livestock merchant Samuel Haas encountered considerable problems with anti-Semitically inclined parts of the rural population in the region. One of the problems of those involved in agricultural products trade was the form of "exchange of goods". For livestock, large sums had to be put up for advance payments, so loans had to be taken out, making the merchants dependent on their customers' good payment behaviour. At the time of the global economic crisis, though, Jewish livestock merchants themselves often granted their customers credit so they would not lose business. After 30 January 1933, these claims were no longer serviced by the debtors, who wagered that the Nazis would support them in their refusal, which in most cases turned out to be correct. In late 1933, Samuel Haas had to write off several thousand Reichsmark which farmers unwilling to pay from northern Hesse had still owed him since 1932.

Customers were pressurised by the district Nazi party organisation

A different method of pushing Jewish businesses out of the market was direct intervention by the Nazi party. Successful Jewish business owners who had accumulated sufficient reserves were initially affected less severely by the boycott. So from the second half of 1933, action was taken locally to exert pressure on persons identified as customers of Jewish merchants. Thus, towards the end of 1934 the owner of Rosdorf Manor, "in concern for his own safety", withdrew as a major customer of Goettingen livestock merchant Eugen Meininger, causing the latter's business to fail.3 The co-owners of grain merchants Bros. Rosenthal in Goettingen, Leopold Rosenthal and Dr. Walter Pohly, were observed by the Gestapo in their every step. Also, the district Nazi party organisation blackmailed their local providers. Despite severe loss of business, the company yet kept going until 1938. Only after the November 1938 pogrom, the owners gave up.

In the textile trade, the business owners were defenceless against the boycott measures. On every possible occasion, uniformed Nazi party members were present in front of Jewish-owned shops, such as that of the Rosenbergs in Duderstadt or the shoe shop of the Edinger brothers in Hann. Muenden, scaring off the majority of customers within a very short time. The Rosenbergs' textile shop was "zwangsarisiert" ("compulsorily Aryanised") only in 1939, partly due to their loyal customers from the area around the city4, but Karl and Kurt Edinger very soon felt the effects of the repressions initiated in 1933. Repeatedly, SA troopers in civilian clothing were posted in front of the shop, and unknown perpetrators painted boycott slogans on the shop windows and walls in tar.

In September, the Gestapo arrested Karl Edinger, purportedly because he had vandalised a "Hitler Oak" in Muenden's historic ramparts, and took him into "protective custody" at the Goettingen court prison. The arrest was in fact likely due to Edinger's membership in the SPD5 and the Reichsbanner6 as well as his being the chairman of the local CV.7 After his release, the merchant acted immediately, sold his business and residence and fled to Brazil with his family. The business of successful textile merchant Carl Löwenthal suffered the same fate as that of Karl Edinger. In 1933, SA troopers had daubed "Jude" (Jew) in large letters on his shop window in Lange Strasse in Hann. Muenden, and often stood around in front of the shop to intimidate potential customers. Although these unsanctioned actions were officially forbidden by the national Nazi party leadership in Berlin, there was no risk of being punished for local boycott activists, as long as they didn't wear their party uniforms. Carl Löwenthal somehow managed to maintain his fashion shop until 1935, when he was ordered by the Deutsche Arbeitsfront (German Labour Front, the unified Nazi trade union organisation) to close down. To be able to feed himself and his family, he applied for a licence for the itinerant trade. Many Jewish merchants who had lost their business base had no alternative but to travel from house to house in rural areas to offer their wares.

Apparently the authorities were sure that in view of the seemingly guaranteed anti-Semitic attitude of the rural population, the Jewish itinerant traders would have to give up their business very soon. However, solid business contacts from "better" times ensured a sufficient income for a while. So the Nazi party leadership made arrangements in summer 1938 which forced all Jewish traders to turn in their licences for the itinerant trade. In Hann. Muenden, this applied to five families. They were thus deprived of their last possibility to make a living, and from then on, all that was left to them was to emigrate or to use up possibly remaining reserves. 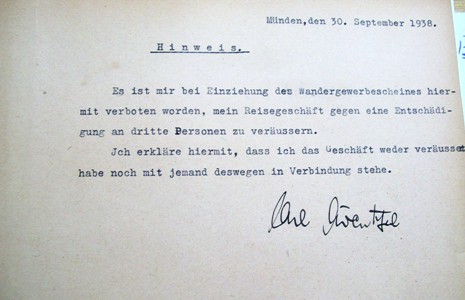