You are here: English Version » Persecution » Withdrawal of Citizenship
Print version of:
https://juedische-emigration.de/en/emigration/receiving-countries/south-america.html

Argentina and Brazil were the countries that took in the great majority of Jewish refugees who fled to South America from the German Reich. Further receiving countries were Chile, Paraguay and – to a much smaller degree - Uruguay and Colombia. This sequence also approximately corresponds to the proportions of emigration from southern Lower Saxony to that continent. From the Gottingen area, 23 Jewish people escaped to Argentina, 15 to Brazil, five to Colombia, two each to Chile and Uruguay, and one person to Bolivia.

The entry regulations of South American countries differed greatly. The differences from country to country were just as great regarding climatic conditions, social circumstances and possibilities for integration. The largest number of refugees from the German Reich was accepted by Argentina. However, numerous voices were raised reporting a policy of repression against Jewish refugees there. The high level of Jewish immigration to Argentina compared to other South American countries was attributed to corruption and to refugees' concealment of their being Jewish rather than to any kind of willingness on the part of the Argentinean state or society to provide shelter from persecution for humanitarian reasons.

In the years 1935 to 1937, primarily the Hebrew Immigrant Aid Society (HIAS) made efforts to get as many people as possible accepted to Argentina. The Jewish Colonization Association (ICA) as a division of that aid organisation bought land in the north of the country near the Brazilian border for settlement. In late 1935, a total of 20 families were intended to make the start at the settlement of Avigdor in the province of Entre Ríos. Among them was Jenny Rosenblatt, née Feilmann, daughter of the widow Angela Feilmann of Hann. Muenden. In December 1935, Jenny Rosenblatt, along with her husband and parents-in-law, boarded the steamer General San Martin at Hamburg, and reached Buenos Aires at the end of January 1936. At the village of Bovril in Entre Ríos, the families were each allotted farmland and a small house. As most of them had previously worked in business or commerce, they were not used to physically exhausting work in extreme climatic conditions, so most of the fledgling farmers gave up after only a few years. In early 1939, Jenny Rosenblatt and her family (which by then included two daughters), also moved back to Buenos Aires.1 Her parents-in-law continued within the farm, as the income from the small plot was sufficient for two people. The Rosenblatts arrived back at the Argentinean capital "without a single cent" and were forced to take any unqualified and badly paid job they could get. Thus, Jenny Rosenblatt worked as a cleaner, housemaid and factory worker, her husband as an unskilled labourer and construction worker. Not only did they need to feed their family, but Jenny's mother Angela Feilmann was supposed to join them from Hann. Muenden in spring 1939. To this end, a significant sum had to be raised to pay the bribe for her visa, the so-called llamada. Their endeavour was successful: Angela Feilmann arrived at Buenos Aires in March 1939.

Alfred Simon, who had been forced to "illegally" flee to France in 1933, also depended on precarious jobs with rough conditions. After his marriage to Gisela Damis in Paris, he had immediately begun to take care of their joint emigration to Argentina.2 In January 1936, they departed from Antwerp on their way to Buenos Aires. At first, as they did not speak the language, they received support from the Deutsch-juedischer Hilfsverein Argentinien ("German-Jewish Aid Society of Argentina"). Once the aid was discontinued, Alfred Simon was also among those new arrivals that needed to take any available job. In his struggle to provide for his family, which by then included a new-born daughter, he worked as a relief waiter, assistant construction worker, farmhand and metal worker. Then, in a job as a dockworker, Alfred Simon had a severe work accident resulting in a 50-percent disability. He was only able to work part-time after that, so that for some time in the 1950s, his daughter had to provide the family upkeep working as a secretary.

At some stage in 1938, the Argentinean government issued the secret directive Circular 11, intending to stop Jewish immigration. Until then, entry had been possible if arrivals provided proof of holding sufficient funds. Residence permits were now issued only for a limited period and on the condition that the refugees were able to take care of themselves financially. However, as the new regulations lacked clear definitions, there were still ways to enter the country. Thus, as in the case of Alfred and Gisela Simon, first-class passage on a ship suggested a social status that tended to open up possibilities for entry. Journeys on visas obtained for Paraguay frequently ended in Buenos Aires, as the political situation in Paraguay was so unstable that the country was on the brink of civil war, making it an undesirable destination for immigration. In the 1940s, the Argentinean capital thus became the largest centre of Jewish settlement in Latin America.

There is proof that between 1933 and 1941, at least 22 Jewish refugees from the Gottingen and Osterode districts escaped to Brazil. Just as in Argentina, so-called Vorzeigegelder (“show money”) were demanded by the largest South American country to prevent impoverished immigrants from entering. There was also a similar programme in Brazil to attract farmers who would live in newly founded settlements and cultivate land in the country's vast, untouched wilderness. Due to the climatic conditions, numerous projects failed, and living in an environment their organism was not used to, many settlers contracted diseases. Hans Kaufmann from Gottingen as well as Fritz and Erwin Meyer from Hann. Muenden emigrated overseas at an early stage. Being young and having a vision for their future, they initially considered the problems of a new beginning to be a challenge.

Brazil offered many opportunities, but there were also dangers

Hans Kaufmann, son of the general practitioner Dr. Julius Kaufmann, was born in Gottingen in 1911. After passing his Abiturpruefung (secondary school leaving exam and higher education entrance qualification) at the Staatliches Gymnasium (today named Max-Planck-Gymnasium), he also aspired to become a medical doctor. He therefore enrolled at Munich first, then switched to Gottingen University, and successfully took the preliminary exam for physicians in 1933. After a subsequent stay at Florence for three clinical semesters, he returned to his home town in 1935. However, due to an objection from the chairman of the Gottingen branch of the Nazi student organisation Nationalsozialistischer Deutscher Studentenbund, Hans Kaufmann was not permitted to continue his studies or graduate. Further, the Gestapo threatened to intern him in a concentration camp if he failed to leave the country within two months, so he endeavoured to obtain a visa for Paraguay. As he was unable to take care of all the formalities in time, he was granted an extension of the deadline until 07 July 1936.

In the mid-1930s, visas for Paraguay were comparatively easy to get. For a small sum of "Vorzeigegeld", the consular staff stamped the entry permit into an applicant's passport. The political situation in Paraguay though, characterised by frequent, violent revolutionary and counter-revolutionary activities, was not one to encourage actual immigration to the country. Just as most holders of Paraguay visas, Hans Kaufmann stayed in Buenos Aires at first. He survived as an unskilled worker for the South-American Mining Company, until an acquaintance he had met on the ship informed him of job opportunities in farming near the village of Rolandia in the Brazilian federal state of Paraná. The settlement had been founded by German merchants during the global economic crisis, and since the mid-1930s, it had attracted increasing numbers of Jewish refugees.

Hans Kaufmann arrived at Rolandia in March 1937. He got a job at the fazenda of Dr. Rudolf Isay, formerly a well-known patent lawyer in Berlin who, being Jewish had been forced to leave Germany and had bought land in Brazil, establishing his farm in 1935. Isay described the climatic conditions thus:

Translation of quote:
"Our climate is subtropical, i.e. we live on the edge of the tropical zone … Therefore we don't have the two rain periods and dry periods which are usual in the actual tropical zone, but only one rain period in summer (January to March) and one dry period in winter (June to August) … So far, annual precipitation has been between 1000 and 1900 mm. The largest amount of rain that came down in one night was 102 mm in February 1943; several mill dams and bridges were washed away then."3

Such circumstances, along with temperatures of frequently above 36°C, were hard to get used to for people from central Europe, making the unfamiliar heavy physical labour even more exhausting. By the time he had proven himself working at a number of farms, also as a foreman, Hans Kaufmann fell ill. He contracted amoebic dysentery, which resulted in severe hepatitis and chronic gall bladder problems. After a period of convalescence at São Paulo, he returned to Rolandia and acquired a plot of land himself. Hans Kaufmann got married in 1939, and three children were born until 1949.

Illness was an additional obstacle

As the hepatitis had not been cured completely, the fledgling farmer also developed pleurisy and subsequently tuberculosis. His illness prevented him from developing the farm properly, so prospects for economic stabilisation failed to emerge. Hans Kaufmann later resumed: "wir haben uns regelrecht durchhungern müssen"4, so in 1941, the family gave up on this attempt to establish an independent existence as farmers. They left the rainforest of northern Paraná and moved to Itapeva in the São Paulo district.

During the period of Nazi rule, over 7,000 Jews fled from the German Reich to Uruguay. In this, it was to their advantage that in 1938, a right-wing dictatorship was deposed and replaced by a more liberal regime, which interpreted the existing highly restrictive immigration regulations in a much less rigorous manner. While the examples of South American countries quoted above are an account of the refugees' hard struggles for their more or less successful new existence, the example of Uruguay is one where the refugees mostly considered a country to be an interim stopover on the way to a final destination.

Josef Stern, a textile merchant of Dransfeld near Gottingen who had become affluent in the 1920s, attempted to stay in Nazi Germany at first and keep going financially. Once he had accepted that his endeavour was doomed to fail, he planned to immigrate to North America with his wife and son. However, despite having relatives in New York providing support, his efforts were unsuccessful, so Josef and Regina Stern escaped to Uruguay as a temporary solution. 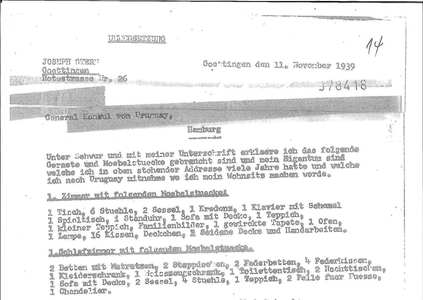 Files of the OFP-Devisenueberwachung document the successive failed attempts of the Stern couple to use tickets to New York they had booked. In each case, either required documents from German authorities were still missing, or the visas from the US consulates. Money already paid in was then reimbursed by the shipping lines. For each payment from and reimbursement to their blocked accounts, permission had to be obtained separately from the foreign exchange departments of the German financial authorities. The bureaucratic effort involved in addition to all other organisational aspects was quite significant.

Departure was finally successful in 1940, although to South America

For the first time, the Hamburg-Suedamerika-Dampfschiffahrtsgesellschaft (HSDG) refunded a payment for unused tickets in early January 1939, to the amount of 1,000 Reichsmark (RM). In August of the same year, the Sterns tried again, this time making a payment of RM 3,000 to the company. It appears that the beginning of the war prevented the couple from departing to the United States, so that the HSDG also refunded this amount in early November 1939. The only option Josef and Regina Stern still had was to quickly escape to Uruguay, which they finally succeeded in doing at the beginning of the year 1940.6