Reich's financial authorities’ role in the expropriation of the Jewish segment among the German population between 1933 and 1945 has been described extensively.1 What has so far been addressed to a lesser extent are the effects of Nazi financial and fiscal policy on Jewish emigration efforts. Yet some of the government's measures had fatal consequences for the persecuted.

Frequently, the freezing of accounts and dispossession of assets not only obstructed emigration and ultimately led to deportation to the extermination camps, but also had a serious impact on those who were spared. Because of the foreign currency situation of the German Reich, which deteriorated progressively during the 1930s, partly caused by self-inflicted international isolation, the frozen assets of Jewish refugees aroused the greed of the Reich's Nazi government.

Instruments introduced at an early stage to reduce the assets held by Jews, such as specific tax regulations, were therefore expanded successively, in preparation of subsequent expropriation. Safeguard ordinances and asset freezes made it more difficult for those wanting to emigrate to initiate the necessary steps for their escape in time. For every single payment they required permission from the Oberfinanzpraesident (head of the regional financial authorities) or other authorities in charge.

In the course of the persecution activities, the Oberfinanzpraesidium (OFP) in Hanover as the supreme financial authority of Lower Saxony kept gaining in relevance. While the OFP was initially merely in charge of collecting special taxes, when its responsibilities were extended to general assessment of Jewish assets, its sphere of influence grew significantly. In the final configuration, its authority reached from foreign exchange control for Jewish emigrants via issuing safeguard ordinances for their assets to realisation of the property left behind by the persons deported to the camps.

With the extension of its responsibilities, its staff also increased, new departments were established and career opportunities were created. Next to the Devisenstelle (foreign exchange office), which was not only in charge of harassing the Jewish population, emerged the Straf- und Rechtsabteilung (criminal and legal department, later renamed Devisen-Ueberwachungs-Abteilung, (foreign exchange control department), and the Genehmigungs-Abteilung (permit department). Customs investigation was placed in the authority of the Devisenstelle. 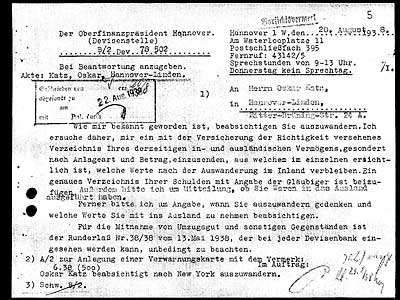 The authority super ordinate to the OFP Hanover was the Oberfinanzpraesidium Berlin-Brandenburg, which in turn received its instructions directly from the Ministry of Finance. At a later stage, the tax office of Moabit-West in Berlin, which was in charge of realisation of the confiscated Jewish assets, completely transferred this competence to the OFP, which gradually passed it on to the local tax offices.

Collaboration between various authorities generated a close-meshed network of persecution

The OFP, tax offices and customs departments were in permanent contact with the Gestapo, both with its regional and national offices. In charge of the Goettingen region was the Hildesheim Gestapo office. Further, for registration and confiscation of Jewish assets, the financial authorities closely collaborated with the local administrative organs, in particular with mayors and Landraete (heads of regional administration). In accordance with the "Fuehrer Principle" of the time, the latter had the authority of chiefs of police of cities and municipalities. By means of this kind of collaboration between the authorities, this also included banking supervision, those in power spread a tight-knit network of registration and surveillance of Jewish assets across the entire country which hardly any persecuted person was able to evade.