You are here: English Version » Persecution » Withdrawal of Citizenship
Print version of:
https://juedische-emigration.de/en/emigration/aid-organisations/german-reich.html

Probably the most important aid organisation inside the German Reich as a point of contact for advice in all matters of emigration was the Hilfsverein der deutschen Juden ("Aid Society of German Jews"). In charge of financing the emigration and establishing contact to the relevant departments of the Nazi bureaucracy were the respective offices of the Reichsvereinigung der Juden in Deutschland ("Reich Association of Jews in Germany", RVJD).

The RVJD was a compulsory union of all Jewish communities, congregations and organisations, whose foundation the Nazis had ordered in 1939 to gain tighter control over all Jews in Germany. Initially it had been established by the Jewish communities in autumn 1933 under the name Reichsvertretung der deutschen Juden ("Reich Representation of German Jews") to be able to speak with one voice in facing up to the Nazi regime's growing animosity. However, by 1935, any connection between the terms "German" and "Jew" was considered completely inappropriate by the Nazis, so the association was forced to change its name from "... German Jews" to "... Jews in Germany". It was the Nazis' intention to thus clearly emphasize the separation between Jews and "Aryan" Germans.

The Reichsvereinigung der Juden in Deutschland

In the first months after the Nazis had seized power on 30 January 1933, a central organ of the RVJD, the Zentralausschuss für Hilfe und Aufbau ("Central Committee for Aid and Construction"), began to address the matter of emigration, although still to a very limited extent. The persons in charge primarily advocated cushioning the blows the Jewish population was being dealt by the anti-Jewish measures affecting business and working life by means of negotiations and petitions. The organisation documented its policy in their monthly and annual publications. Domestic and foreign authors were given the opportunity to present their analyses of the German-Jewish population's political situation. After enactment of the "Citizenship Laws" in September 1935, the focus of the RVJD's policies had to be shifted to other aspects. The marginalisation of Jews by means of the "Nuremberg Race Laws" and the progressively desperate situation of many Jewish families due to the boycott measures forced the organisation to concentrate on emigration and related subjects as central matters. In a report by the US aid organisation American Jewish Joint Distribution Committee (abbreviated in the following as JDC) of 1935 it is stated that two out of three of the RVJD's newly instituted committees were already dealing with the matter of "emigration".

One of the major subjects: occupational retraining

Once emigration was on the agenda, activities were at first focused on occupational training for young people. As until 1937, besides the US and Palestine, South America - and there mainly Argentina - were the main countries taking in refugees, prospective emigrants had to be prepared for the circumstances there. Academic and commercial occupations were in little demand; jobs were mostly available in agriculture and domestic economy. To provide the appropriate training, numerous retraining establishments were supported by the organisations integrated in the RVJD. Operation of the occupational retraining centres and social welfare for the impoverished Jewish population, primarily for older people, presented an enormous challenge to the organisation in both the respect of logistics and of funding. The budget for 1938, for example, was assessed to require 3,500,000 Reichsmark (RM), plus RM 350,000 in liabilities carried over from 1937.1 However, acquisition of "voluntary" funding from local Jewish communities' shares in the costs yielded a mere RM 1,500,000, as over half the German Jewish population had already fled in the years before, a fact which made itself felt quite noticeably in the RVJD's financial situation. Thus, the support provided by US aid organisations became all the more significant, they donated over RM 2,800,000 in total.

The JDC alone had remitted approx. US$ 650,000 to the RVJD in 1937 2, and stepped up its funding even further until 1941. The overseas donors were concerned about two central problematic matters. On the one hand, due to the large number of Jewish people in need, they wanted to avoid providing specific support to individuals, and advocated group emigrations, as these were easier to handle in planning. In the longer term, though, this premise proved to be impracticable. On the other hand, from 1939, the RVJD was directly subordinated to the Reichssicherheitshauptamt (RSHA), which presented a serious problem to the aid organisation's US partners. Nevertheless, while it was still possible for the persecuted Jews to leave Germany on the aid funding, the usefulness of donations remained clearly visible to the Jewish communities raising them. It was, however, not possible for the aid organisations to control whether and in which ways their financial support was actually used inside the German Reich.

The Hilfsverein der Juden in Deutschland

Founded in Berlin in 1901, the Hilfsverein der deutschen Juden ("Aid Society of German Jews") was initially involved in providing aid to Russian Jewish immigrants and transit migrants. After the Nazis had assumed power, the organisation made use of its international contacts to support the German Jewish population's efforts to emigrate from the Reich. In the period from its compulsory renaming in 1933 until its forced dissolution in 1939, Hilfsverein operatives continued their work of finding ways to help those people escape who had problems implementing their emigration plans for financial or other reasons. 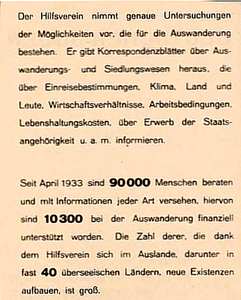 In 1939, the Hilfsverein was integrated into the Reichsvereinigung der Juden in Deutschland by order. This meant that the society's work supporting Jewish emigration was controlled by the authorities from this time on. In total, the aid organisation managed to find ways for approx. 90,000 persecuted Jews to leave Nazi Germany between 1933 and 1941. In this, it closely cooperated with foreign aid organisations, such as the Council of German Jewry in Britain or the JDC and HIAS in the US. An example of the work of the Hilfsverein der deutschen Juden can be provided by the efforts to effect the emigration of Alfred Nassauer of Hann. Muenden.

Alfred Nassauer was born in 1898 in the town of Wehen in Hesse, which today is part of the urban region of Wiesbaden. The Nassauer family had been residents of Wehen since the first third of the 19th century.3 In 1924, the merchant moved to Hann. Muenden. There he married Rosa Mueller in 1928. Soon after the wedding, the couple moved back to Wehen, where Alfred Nassauer found an occupation as a livestock merchant. Shortly after the Nazis had come to power, Rosa Nassauer returned to Hann. Muenden together with her daughter Ruth, born in 1931. Her husband Alfred followed only in May 1937. It is unknown why the spouses returned to southern Lower Saxony separately at such a great distance in time. The marriage was divorced one year later, in May 1938. 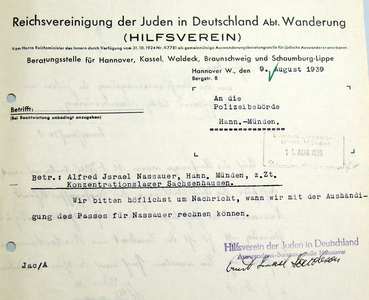 Alfred Nassauer appears to have been involved in the local political resistance in Hann. Muenden. In June 1938 he was arrested, convicted and transferred to the concentration camp at Sachsenhausen. He served his sentence of one year at the camp, labouring under hard conditions for the Siemens company.4 During this term, Alfred Nassauer received support from the Hilfsverein der Juden in Deutschland. As early as August 1938, on behalf of Nassauer, the Hannover advice bureau for emigrants (the Hilfsverein's local office in charge), applied to the police authority of Hann. Muenden for a "clean" certificate of good conduct. The consulates of several countries demanded submission of such a document as a prerequisite for issuing a visa. The Hildesheim Gestapo office also got actively involved in the efforts, eager to deport Nassauer to some other country and thus supporting the Hilfsverein's activities. In a letter to the mayor of Hann. Muenden of December 1938, a Gestapo official enquired about what progress had been made in the procedure of getting the certificate issued. The mayor, though, had already reported two weeks after the Hilfsverein's letter of application that the matter had been settled. On 16 August 1938, the certificate had been sent to the commander's office of the Sachsenhausen concentration camp with the request to hand it over to the convict. 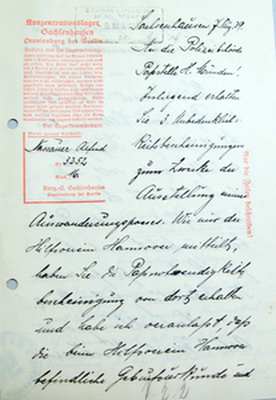 In the end, the Regierungspraesident (head of the regional administration) at Hannover also gave his approval for the document to be issued, however on the condition that its term of validity be limited to three months. The period must have been extended a few times, as by August 1939, Alfred Nassauer had still not succeeded in leaving Germany. A letter has been preserved from the time of the end of Nassauer's term at the camp, once more addressed to the mayor of Hann. Muenden, in which the convict requests the issuance of a passport. Apparently all required documents had been received and passage on a ship booked, as the handover of a passport was the last link in the bureaucracy chain of obtainment and submission of valid papers. At that time, though, less than a month before WWII began, the mayor of Hann. Muenden was no longer in charge of issuing passports. The latter immediately had the submitted documents forwarded to the official in charge in the district of Parchim, where the Sachsenhausen camp was located.

To date it is unknown whether Alfred Nassauer successfully escaped from Germany with the help of the Hilfsverein. Both the Hilfsverein's energetic work in summer 1939 and the lack of any records referring to Nassauer in the victim lists of the Gedenkstaette des KZ-Sachsenhausen, the Shoah Database in Yad Vashem and the memorial book of the Bundesarchiv are indicators of Alfred Nassauer's likely survival. What is unusual for a surviving former concentration camp inmate, though, and in this case for one, who was persecuted on both racial and political grounds, is that no documentation on claims for compensation from the post-war period is available. There are at least two possible explanations for this. Either Alfred Nassauer was unwilling to have any further contact with German authorities, which was quite often the case among survivors of Nazi terror, or he had already died abroad by the end of the 1940s when the restitution proceedings, the so-called Wiedergutmachung, began. Beyond such explanations, not all means of further research have been exhausted at present.

Next page: Outside Germany