What were the consequences for refugees of the measures taken by the financial authorities? A further example from Goettingen illustrates to which extent the expropriation before and after emigration was completed.

The couple Hermann and Thekla Jakob, resident in Gotmarstrasse 9, were part of the middle level of Goettingen's business class. Towards the end of the 19th century, the merchant had settled in Goettingen and established a leather goods store.1 As a franchisee of a Hamburg-based trade group, his sales figures had been good, so that starting his own business seemed to him to be the next logical step. He purchased the residential and business building in Gotmarstrasse and - at least until the global economic crisis - attempted to succeed as a shoe manufacturer. The boycott imposed by the Nazis slowed down the development of his business, though failed to prevent it completely.

Preparations for looting began in 1936

After his first wife had died and with everyday Nazi terror against the Jewish population on the rise, in 1935 Hermann Jacob began to contemplate selling his business. Soon, he sold out to a company in Kassel and remarried. His second wife, Selma Cohn, was the widow of a manufacturer in Thuringia. Together with her he initially lived on the proceeds from the sale, but they were already planning their emigration. At the latest from 1936, when accounts were frozen, all payment transactions were monitored by the foreign exchange offices, the Jacobs came under surveillance by tax investigators, and the Gestapo became involved in the matters, the couple's expropriation began. 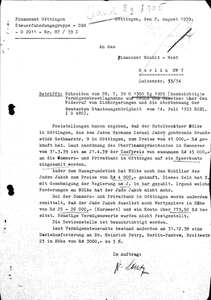 For several reasons, their emigration was delayed until 1939. Including the house and premises, around 1938 the merchant's assets still amounted to approx. 120,000 Reichsmark (RM). Selma Cohn had also brought her own savings into the marriage. The couple's assets began to attract the attention of the Nazi authorities. Within a short period, the state appropriated more than half of what the Jacobs owned. In this, the authorities proceeded with startling meticulousness.

Usually, once bank accounts had been frozen, the Reichsfluchtsteuer was assessed. This process took place frequently during 1936/1937, no matter whether the persons affected were actually planning to emigrate or not. As the amount of tax due was determined according to a person's total assets, the amount demanded of Hermann Jacob was RM 16,500. Further, the former business owner had to pay close to RM 4,100 to the emigration fund of the Reichsvereinigung der Juden in Deutschland2. However, the actual looting procedure began only after the November 1938 pogrom. The amount of Judenvermoegensabgabe (Jewish Wealth Tax) to be paid by Hermann Jacob was RM 21,400. After he had sold his house - with an actual total value of RM 90,000 of which only RM 45,000 were officially approved as the sale price - the financial authorities now proceeded by confiscating the couple's frozen securities portfolios. The sums from the house sale and the securities portfolios released for the emigration procedures had to be paid into an Auswanderersperrkonto (blocked account for emigrants). Of a total of RM 87,300, a mere RM 33,000 was released. Thus, a large portion of Hermann and Selma Jacob's assets had already been appropriated. Their furniture and household items had to be sold for no more than RM 4,000. All gold and silver items with a value of RM 5,000 had to be turned in to a pawn shop and a coin collection belonging to Selma Jacob valued at RM 7,500 to the financial authorities. Before the couple received the visa stamps in their passports for the escape to Chile, RM 1,825 were remitted to the DeGo (Deutsche Gold-Diskontbank) in Berlin just to receive permission to have their remaining belongings they intended to take along abroad released. 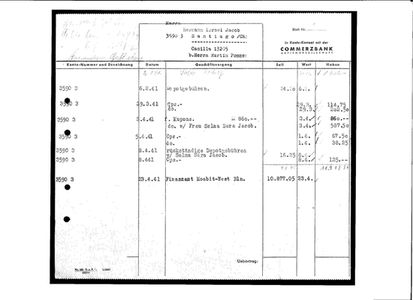 The DeGo was also in charge of changing the credit in the emigrants' blocked accounts into foreign currency. The bank offered an exchange rate of 0.06 US$ per mark deposited in the emigrant's blocked account3, and after the exchange into US dollars sent a cheque for $ 783.75 to Santiago de Chile in summer 1939. This amount was all that was left of the RM 33,000 originally released. Besides their personal luggage and the household items to be forwarded later, Hermann and Selma Jacob were permitted to take RM 10 in cash on their journey. Thus they arrived in South America completely destitute. As Hermann Jacob had fallen ill in autumn 1938 and had to undergo surgery, the couple was dependent on support from acquaintances and relief organisations in Chile.

The remaining credit was confiscated by the German state

Their expatriation, published in the Reich's official gazette and thus in effect from May 1940, did not make their situation abroad any easier. The Jacobs were now stateless, and therefore no longer had any representation by an embassy or consulate, meaning that they might be deported at any time. Only when the expatriation was revoked after the war and restitution payments began in the 1950s, their financial situation became somewhat less severe. After Nazi Germany had divested them of their citizenship, also the Jacobs' remaining assets had been confiscated by the state. Their credit in the blocked account, which had shrunk to a mere RM 438, rose again to over RM 10,000 by spring 1941 due to dividend payouts for securities. As if to mock him, the Goettingen branch of Commerzbank kept sending Hermann Jacob monthly bank statements to Santiago de Chile. And finally, on 23 April 1941, the tax office in charge at Moabit-West in Berlin also confiscated that credit to the benefit of the German Reich.