You are here: English Version » Persecution » Withdrawal of Citizenship
Print version of:
https://juedische-emigration.de/en/emigration/escape-routes/escape-routes-via-the-iberian-peninsula.html

Escape Routes via the Iberian Peninsula

The routes via the Iberian Peninsula were the last opportunity for the Jewish population in the Gottingen region to leave the German Reich. Their journey was by rail via France to Barcelona or Lisbon, where they had to spend several days until their departure overseas.

The escape routes via Spain and Portugal were used in particular after World War II had begun. Approx. 30,000 transit emigrants decided to leave this way. Most of them arrived after France had been defeated by the Germans, after May 1940. In total, about 50,000 people fled via the Iberian Peninsula during the war.1 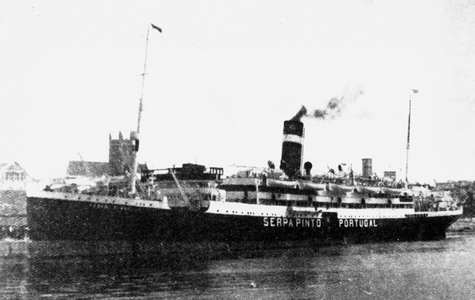 From 1941, the situation in Lisbon became progressively more difficult. Because of the large number of refugees and the increasing duration of their waiting periods, the name "Europe's Waiting Room" was coined for the Portuguese capital. Initially, Portugal had rather moderate entry regulations, but from 1941, the permitted period of stay was reduced, to 30 days at first. Further, the visas the authorities still issued were for transit purposes only. Due to the war, fewer and fewer transport options remained for those intending to travel on to the Americas. This "bottleneck" appears to have given rise to a tightening of administrative measures. Thus, e.g., from 1941, refugees were forced to move into mass accommodation facilities, although a certain freedom of movement was maintained, and people were not interned.

Shortly before the German borders were closed off to Jewish emigrants in October 1941, some families from the Gottingen district still succeeded in escaping via the Iberian Peninsula - with support from relatives and aid organisations abroad. The last ones travelled by rail via France to Barcelona or Lisbon as late as in June 1941. After a few days in the respective country of transit, they embarked on their journey to New York. In all cases on which information is available for that late period, family members in the US had deposited funds for travel expenses with the American Jewish Joint Distribution Committee (JDC). After the US authorities tightened entry regulations from summer 1941, only affidavits from relatives were accepted as the basis to still get one of the sought-after visas.

Some examples of escape from the Gottingen region

As it happened, two families from the Gottingen district travelled on the same ship from Barcelona to New York. The Ciudad de Sevilla set off from the Catalan capital on 01 August 1941. The Schwalm family from Hann. Muenden had arrived there only in mid-July.2 Back in Germany, Moritz Schwalm had been in business as a livestock merchant, and until the end of the Weimar Republic, sales had been very good. This changed immediately after the Nazis assumed power. Among the local National Socialists, whose electoral base was particularly strong in rural areas, Jewish agricultural and livestock merchants were extremely unpopular. Measures were thus taken immediately to push the Jewish traders out of the market. 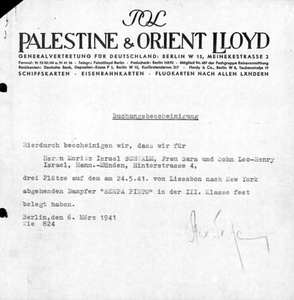 Due to the continuing boycott against Jewish-owned businesses, at the latest by 1937, Moritz Schwalm was unable to continue in his trade. One year later he decided to sell his house and business premises to raise funds for the family's planned emigration. He requested of a non-Jewish dairy merchant to act as a middleman. In 1939, the buyer, who had been found in Kassel, paid a reasonable price for the house and premises, which provided Schwalm with the financial basis for his emigration plans to still be implemented. During the night of the November 1938 pogrom, Moritz Schwalm was assaulted and arrested by SA and SS troopers. He was interned at the Gottingen prison, along with nearly all Jewish men of Hann. Muenden. Upon his release, the Muenden livestock merchant was forced by the financial authorities to pay the amount of RM 2,500 in "Jewish Wealth Tax" from the money received for the sale of his property. The family's desperately needed funds for emigration were thus seriously reduced.

Schwalm's brother, who was already in the US, issued the required affidavit

Even though the Nazis had eliminated the protection against eviction for Jewish tenants from the German tenancy regulations, and the sale contract for his house stipulated that the Schwalms, now tenants in their formerly own house, were to move out by the end of 1939, the new owner permitted them to continue living there until their emigration. The new landlord thus risked becoming a target of government repressions himself. With financial support from his brother Levi Schwalm, who had been a teacher at the Jewish school in Dransfeld until 1933, Moritz Schwalm still managed to escape to the US with his wife Sarah and son Henry Leo, as late as 1941. Levi Schwalm had already fled to New York via Antwerp with his family in October 1939, and lived there in Washington Heights.

With his brother's affidavit and the remaining money from the house sale, Moritz Schwalm could travel to Hamburg on 03 April 1941, to receive the US immigration visas for himself and his family. The costs for passage by ship and the rail tickets to Barcelona were covered by the funds deposited by Levi Schwalm with the JDC. Moritz Schwalm and his family arrived in New York on 20 August 1941 and found provisional accommodation in Manhattan. With Levi Schwalm's help, he fairly quickly managed to find employment, at a branch of the Canadian engineering company Rubinstein Brothers. After the stipulated period of five years, Moritz Schwalm, who had changed his name to Morris, applied for naturalisation for himself and his family with the New York authorities.

The Rosenbaums from Rosdorf also escaped via Barcelona

At the same time as the Schwalm family, the Rosenbaums, a couple from neighbouring Rosdorf, also fled from the Gottingen area. Alfred Rosenbaum had been born in Rosdorf in 1880. Between 1920 and 1938, he managed the manufactured textiles business established by his father, retaining the latter's name for the enterprise, "Julius Rosenbaum". His wife Bertha helped out on the premises. Both were considered by the local population to be proper and correct business people, and were generally popular.3 Alfred Rosenbaum also traded his textiles in the surrounding villages. This mobile business made it possible for the merchant to counteract the negative effects of the anti-Jewish boycott for a fairly long time. Beyond this, besides the family business and property in Rosdorf, he owned a store in Gottingen's city centre. So, inevitably, at the latest by 1938, the successful and popular businessman was in the focus of the Nazi party organs and the authorities. His licence for the textile trade was revoked, and thus his basis of existence destroyed. During the night of the 1938 pogrom, the Rosenbergs were physically abused and humiliated by SA troopers in Rosdorf.4 The Gestapo arrested Alfred Rosenbaum and deported him to the court prison at Reinhausen. After his release, he attempted to stay out of sight at the house of Selmar Muller in Gottingen in Weender Landstraße. He hardly ever left those premises any more, and witnesses described him as frightened and intimidated. The escape of the Rosenbaums was organised by their son Kurt, who had emigrated to the US in 1937 at the age of 15. Kurt Rosenbaum had issued the required affidavit and taken care of depositing the funds in the JDC's account. 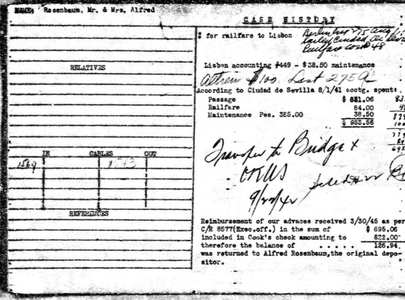 The Rosenbaums also travelled to Barcelona by rail at the end of July 1941, to check in on the Ciudad de Sevilla on 01 August. To pass through Spain, Alfred and Bertha Rosenbaum needed an extra transit visa, which was only issued upon submission of a valid passport. The German authorities, however, by then no longer issued regular passports to Jewish people, or refused to extend expired ones. The couple were therefore issued special documents with a large 'J' stamp (for 'Jew') which were valid for a very limited period and for emigration only. Upon submission of these replacement passports, the transit visa stamps were provided by the Spanish consulate. The Rosenbaums could only take along two suitcases with clothing and RM 10 as a travel allowance, anything more than that was not permitted. They had checked in their household belongings with the haulage company Hannoversches Fuhrwesen, in nine cases. For this service, they had been obliged to pay RM 1,000 to the DeGo-Bank in Berlin. The packing cases were supposed to be forwarded to Spain and then on to the US, but never arrived there.

The Rosenbaums settled down in Baltimore

After three weeks' travel, Alfred and Bertha Rosenbaum arrived in New York, then immediately went on to Baltimore to join their son Kurt. Alfred Rosenbaum, at the age of 61, even found work fairly quickly, although in unskilled jobs for some time, like most other immigrants. In 1942, he was listed in the "old men's draft registration", an obligatory register drawn up by the US Army of all men born between 1877 and 1897. After the US had entered the war in December 1941, the armed forces intended to have a last reserve available, though the registered persons were not drafted for active service in the end.

Shoemaker Jacob Faibuschewitz from Gottingen also still managed to flee via the Iberian Peninsula in 1941. In his home town in the 1920s he had established a shoe manufactory named Die Schuhklinik.5 Among other customers, the workshop for orthopaedic footwear supplied the city's university hospital, and thus had a reliable source of income. As early as in 1934, the Nazis pressured the university to stop buying from the "Ostjude"6. Until 1938, Jacob Faibuschewitz could still depend on his regular customers, but later had to gradually sell nearly all his workshop equipment. Only occasionally he still managed to get work repairing the shoes of acquaintances or members of the Jewish community. Until after the beginning of the war, the near-out-of-work master shoemaker got by in this manner. Finally, his son Alfred, who had emigrated to the US in 1937,7 gathered the necessary funds for a deposit with the JDC in New York for his father's passage by ship. Via the Oregon Emergency Committee, a Portland-based aid organisation, he paid US$ 365 into a JDC emigrant's deposit account on 18 August 1941. Two days later, his father, who had already travelled to Lisbon from Berlin by rail, boarded the steamer Mouzinho and sailed to safety in the United States.