Over the course of the 1930s, local tax offices were allocated more and more authority for registration and realisation of Jewish assets. In most cases, they made use of this growing power of discretion in a repressive way and even seized assets and objects of value of the persecuted for use at their own offices.

In charge of the southern part of Lower Saxony were the Finanzaemter (tax offices) of Goettingen, Hann. Muenden and Northeim. Initially, their tasks were limited to tax-related registration activities. Ministries and higher financial authorities had developed special anti-Jewish regulations for this purpose already at an early stage. This refers to the Reichsfluchtsteuer (Reich Flight Tax), which at first was universally applicable, but also to various foreign exchange stipulations. From 1937/38 on, when "Jewish assets" were generally registered and then the safeguard ordinances were issued against assets exceeding a certain exempt amount, the increase in areas of competence of the local financial authorities began.

Finance officials were involved in auctions

Local administrations were obliged to disclose information to the tax offices, while on the other hand the tax clerks had to coordinate with Nazi party bodies such as the district leadership as well as report to higher Gestapo offices. There was also a regular exchange of information with the Staedtische Sparkasse (municipal savings bank) in Goettingen. Any changes to the credit of Jewish account holders had to be reported to the authorities. However, not only name lists came across the desks of the finance officials. They were directly involved in auctions of personal effects of Jews who had fled, later they oversaw the auctions of personal effects of those who had been deported, which were conducted by auctioneers. 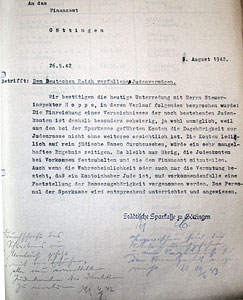 When the activities aimed at Jewish property began, the local tax offices were mainly involved in administration of the special taxes imposed.1 The Reichsfluchtsteuer, which had already been in force since 1932 before the Nazis came to power, was gradually, with the number of intended Jewish emigrations rising, turned into a tax directed almost exclusively at the assets of Jewish persecuted. At first, the tax offices charged 25 percent of the entire assets as a levy, though in the course of the 1930s the amount was raised to 75 and then to over 90 percent. The annual income tax exempt amount, initially 10,000 Reichsmark (RM), was later reduced to RM 5,000. Also, only assets of up to RM 20,000, including residential property, remained tax-free.

As a second major special tax, Hermann Goering introduced a compulsory charge on 12 November1938, the so-called Judenvermoegensabgabe (Jewish Wealth Tax), to the amount of 1,000 million Reichsmark "due to the Jews' hostile attitude towards the German people". After the pogrom of 09 November 1938 the Nazis had unleashed, the victims of the attacks were thus forced to pay for the damage caused themselves. The Jewish communities divided the lump sum of RM 1,000 million among their members. The local tax offices were instructed to register the persons liable to pay the tax and to ensure smooth implementation of its collection. For this purpose, even the local tax offices now established their own surveillance departments. In collaboration with the other local authorities, the officials identified those liable to pay and drew up name lists.

From 1937 on, the Reich's ministries of economy and finance constantly issued new directives to regulate the registration and freezing of "Jewish assets". These edicts, below the level of legislation, were addressed directly to middle and lower administrative bodies. The central item was the safeguard ordinance by which savings and security portfolios of Jewish holders could be frozen. As soon as there was any suspicion that persons with certain reserves were intending to emigrate, which was generally assumed if someone was Jewish, the accounts were supposed to be frozen. To obtain information about those affected, the cooperation of the local tax offices was required. Such surveillance and freezing of accounts had serious consequences for those who wanted to emigrate. Their scope of action was limited considerably, as for any withdrawals from their frozen accounts official permission had to be given.

However, the registration of Jewish assets was not only for the purpose of collecting the special taxes. Upon emigration, the state often confiscated all assets and property of those who had fled, on grounds of withdrawal of citizenship.2 Once the deportations had begun in autumn 1941, the authorities generally divested Jewish citizens of their citizenship in order to begin with the large-scale looting of assets and property left behind by and confiscated from the emigrés and deportees. The profits from the expropriations primarily went to the Reich treasury, as the Nazi state desperately needed further funds for its rearmament programme in preparation for war. But local authorities also received benefits in the form of new equipment and furnishings.

Besides the tax offices, also customs offices and general low-level administrative authorities profited from the assets brought under government control. The Goettingen tax office maintained a list of 81 items, from office furniture via filing cabinets to mirrors, carpets and beds, which were appropriated for "official use" by the office and which were still there in 1945. Over 20 Jewish households, nearly all of them in Goettingen, from 1939 on were subject to confiscations to the overall value of RM 1,549.3 A Hann. Muenden tax office list documented the former owners, the objects the office had taken possession of, and their value. The places where the "objects retained or acquired for official use" were kept are also mentioned.

In particular the rooms of the tax office's head and a further finance official were appointed with curtains, carpets, desk lamps, leather chairs, desks and a couch taken from the households of the Proskauer, Loewenthal, Blankenberg, Meyer and Madelong families. At the main customs office of Hann. Muenden, chairs with wickerwork seats were used, from among the belongings of the Meyer brothers which had been auctioned off, as well as a typewriter and towels of unknown origin. In Goettingen, the customs office took possession of book cabinets and desks of Gustav Mosenthal of Dransfeld. Only years after the end of WWII, the authorities were required to pay compensation for the confiscated furniture to the surviving family members.