You are here: English Version » Persecution » Withdrawal of Citizenship
Print version of:
https://juedische-emigration.de/en/persecution/expropriation/displacement-policy.html

The exclusion of the Jewish population in the German Reich was continued by displacing Jews from social and occupational contexts. At the same time, the process of emigration was set in motion.

Several processes aimed at the Jewish population took place which can be defined by the term "displacement". The economic measures described on the page "April Boycott" were primarily intended to push those affected out of the market to the advantage of "Aryan" competitors. The determination shown in implementation of the "Aryanisation measures" had a serious effect on all sides. Moreover, the new power in Germany clamped down on the persecutes' prospects in the fields of education, training and culture to such an extent that most young Jewish academics and trainees soon left the country, between 1933 and 1935. After the Reichsbuergergesetz ("Reich Citizenship Law", first of the Nuremberg race laws) enacted in September 1935, their situation deteriorated rapidly.

Displacement from business life was only the beginning

From the beginning of 1937, numerous laws existed which further limited the options of Jewish business owners and formed the basis for the expropriations implemented in the following years.1 After the November 1938 pogrom, all independent or self-employed Jewish activity in the German Reich was systematically eliminated by the authorities on this legal basis. The Jewish people's progressive impoverishment often prevented them from fleeing the country as planned, and those who remained behind were to perish in the German extermination camps in occupied Eastern Europe.

Shoe retailer Harry Madelong attempted to prevent "aryanisation" of his shop in Lange Strasse in Hann. Muenden which he had taken over from his father Georg. As revenues had gone down considerably due to the boycott, he applied for permission to do a clearance sale in December 1935. By selling off his wares cheaply during the Christmas season rush, he was hoping to get a better start into the year 1936. A few days later, the Goettingen Chamber of Commerce rejected his application.

Only two years later, in autumn 1937, the sale took place, but in the form of a going-out-of-business sale. At that point, Georg Madelong had already lost the fight for his business. At the end of the year, he sold it to fish merchant Karl Einatz.2 As his wife Hertha still had a valid trade license for the itinerant trade, a small, yet regular income was still available until autumn 1938. In January 1939, Harry Madelong also sold the family residence in Lange Strasse 53 (No. 84 today) to Karl Einatz. The fish merchant was not a Nazi party member and was willing to pay a fair price, as he knew about the Madelong family's plans to emigrate. But the head of the regional administration in Hanover confounded this plan by ordering the sale price to be lowered considerably. Due to payment of outstanding accounts to former business partners and the price of upkeep for the family, the proceeds from the sale melted away very quickly. Also the asset freeze ordered by the Oberfinanzpraesident (head of the regional financial authorities) of Hanover obstructed any plans for emigration. The family failed to get out of Nazi Germany in time. On 26 March 1942, via the assembly point at Hanover Ahlem, the Gestapo deported Harry, Hertha and Georg Madelong to the Warsaw ghetto. They were murdered in April 1943 during the ghetto uprising.3

There are further examples of the displacement process evident for southern Lower Saxony. While in many cities the effects of the boycott became obvious only after months or sometimes even years, in Goettingen and the surrounding area many Jewish business owners, but also university staff, withdrew at an early stage of the fallout. Not only business owners were gradually affected by the loss of their (economic) basis of existence, but also Jewish students as well as employees and pupils. 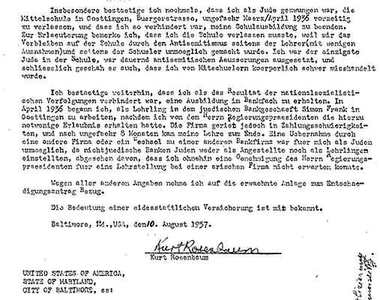 At the Goettingen schools, the change in the atmosphere from 1933 quickly became apparent. With the exception of the Gymnasien (grammar schools), where a higher degree of restraint appears to have been shown, Jewish pupils were marginalized and seriously physically assaulted at all other schools. Besides the everyday danger of attacks from local SA and SS units on the homes of the persecuted, this threat to their children at the schools, places considered to be "shelters", was one of the hardest blows. One can assume that from the beginning, such activities of persecution were intended to drive away the Jewish population.

For these reasons, during the period 30 January 1933 to the enactment of the "Reichsbuergergesetz" in September 1935, numerous members of the Jewish population left Goettingen and the surrounding area. Many of the younger persecuted joined Zionist youth organizations and prepared for their emigration to Palestine in Hakhshara (Hebr.: "preparation") training camps. One example of this can be provided by the Meyersteins of Bremke. During the 1930s, several young people from the three families named Meyerstein living there registered with one of these training camps, which mostly imparted agricultural skills. Margot Meyerstein trained for a new occupation near Hamburg, her cousin Werner trained on an agricultural estate at Appenrode, close to Bremke, and Marianne Meyerstein retrained in the course of her escape at a training facility in Belgium.

After their training, Margot and Marianne Meyerstein emigrated to Palestine, while Werner Meyerstein first went to England, and moved to the Dominican Republic in 1940 with his partner and future wife. Students were also systematically displaced from Goettingen University. They were often still permitted to graduate, but a doctorate or an academic career was made completely impossible. As most Jewish professors and lecturers had already left the university and the country as early as in spring 1933 in reaction to the "Berufsbeamtengesetz", the persecuted students now found networks in other countries available to them which could facilitate their further education after emigration.