You are here: English Version » Persecution » Withdrawal of Citizenship
Print version of:
https://juedische-emigration.de/en/persecution/expropriation/april-boykott.html

Shortly after the National Socialists took over government in Germany on 30 January 1933, assaults on Jews began to take place all over the German Reich by supporters and members of the NSDAP. In other countries, especially the US and the UK, the press commented on the attacks on traders, lawyers, students and pupils with strong criticism.

Goebbels and his party comrades made use of this opportunity to give their anti-Semitic propaganda a new orientation. They presented the German government as a victim of international "atrocity propaganda" while at the same time demonstrating to party members how determined they were in standing up to foreign powers. 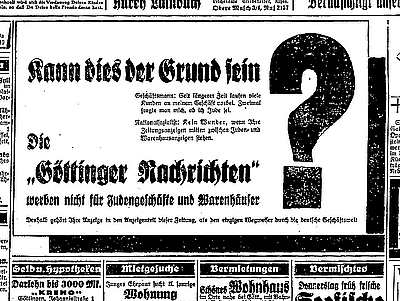 To take a stand domestically as well as internationally, party leadership initiated a boycott against Jewish businesses, lawyers' offices and doctors' practices throughout the German Reich. Apart from representing a signal to foreign powers to keep their noses out of the Reich's domestic anti-Jewish policies, the activities were intended to make clear to the German Jewish population that they no longer had a future in Germany.

Planning and implementation of the boycott scheduled for 01 April 1933 was supposed to be in the hands of local action committees. However, in some cities, the local party leaders commanded their members to go on protest marches already before the intended date. Also in Goettingen, such a rally took place on 28 March 1933, and turned violent during and after the march.1 Shop windows of Jewish merchants were smashed, and some individuals were attacked and maltreated.2 Although in the area which today forms the district of Goettingen, the events around the Boycott Day took a less radical course than in the city itself, a number of incidents still took place. Some Jewish merchants immediately reacted to the events and left the country soon afterwards, e.g. the livestock dealer Samuel Haas from Dransfeld. 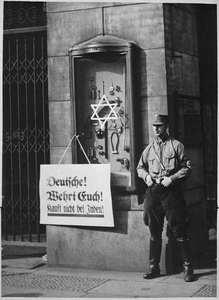 During the night of 01 April 1933, Samuel Haas and his wife were attacked by members of the Nazi Sturmabteilung (SA) in their house in Lange Strasse in Dransfeld. They not only smashed windows and stole a trunk with silverware, but also vandalised the couple's bedroom. This form of assault anticipated the events of the pogrom night of 09 November 1938. The perpetrators were mostly from places nearby in the area, such as Hann. Muenden or Goettingen, not from the town where the crime took place. It seems that the intention was to lower the inhibition threshold for violence by ensuring that the perpetrators did not know their victims personally. This was not a mere boycott of business either; the Jewish families were physically attacked in their homes. A short time afterwards, Samuel and Ella Haas fled to the Netherlands, illegally crossing the border and leaving all their belongings behind.3 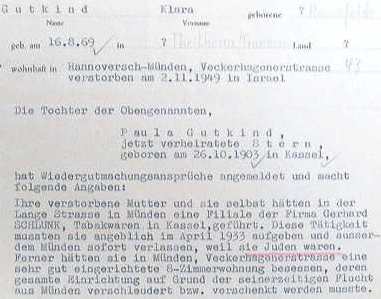 Also in Duderstadt, local boycott committees had been founded prior to the action planned for 01 April 1933, and the local press supported the government measures in its articles. What the consequences were for the Jewish population is evident from the statements of Jewish merchant Ernst Rosenbaum, who fled to England in 1939. His life in Duderstadt in the period after April 1933 he describes as follows:

"Again and again I was verbally abused, old friends no longer greeted me, I was told to leave restaurants, beaten up twice in a pub, threatened on the train. After 1937, the windows of our shop were smashed repeatedly; posters were carried back and forth in front of the shop: "Who buys here is a Bolshevist". One man appeared to have been employed to shout very loudly in front of the shop whenever he saw customers enter. We always began to shake with fear whenever we saw him arrive."4

After 01 April 1933, the activities against Jewish business owners continued

After the boycott of 01 April 1933, the action "officially" ended. However, Nazi business organisations, party formations and also competitors of Jewish businesses seemed to have grown to like the measures. Repeatedly, "unsanctioned" actions took place without official backing from the party. Whether this happened with or without permission from the German government, the boycott - especially the frequent presence of men in uniform in front of shops - not only struck the Jewish proprietors with awe, but also made a serious impression on their customers. Thus, already in 1933, numerous shops had to close down, also in Duderstadt. One witness described the effects of the boycott on Jewish business owners, quoting the Rosenbaum family as an example:

"The Rosenbaums had a very well-established business. Though the profits went down after 1933, because already at that time the SA and SS have those in view who went to Jewish shops, which prevented many people from continuing to go to the Rosenbaums."5

Many had to give up due to the continuing boycott

Even larger businesses with a bigger turnover suffered from the boycott. In Hann. Muenden, the abrasives factory of the Meyer brothers was picked out as a target by a competitor who felt encouraged by the general atmosphere to file a denunciation. The Meyers, who directed an internationally active company, even in 1936, still got orders from the Reichsbahndirektion (national railway headquarters) in Berlin and the clothing office of the Luftwaffe, also located in Berlin. The owner of the competing company, informed of this fact by his representative in Berlin, addressed the Landrat (head of the district authority) of Hann. Muenden:

"On my business travels I was frequently repeatedly able to establish [sic!] that government agencies still continue to submit quote requests and orders to the company of "Awuko" Wandmacher & Co. Hann. Muenden, whose proprietors are the 3 Volljuden (Nazi terminology: "full-blooded Jews") Isaak, Benno and Feodor Meyer." The letter continues: "I beg permission to enquire whether you as the Landrat of the district of Muenden would be able to draw the attention of these authorities to the aforementioned non-Aryan company. With a German salute and Heil Hitler yours faithfully G.T."6

A short time later, the Landrat did indeed inform the respective institutions in Berlin. Due to the boycott measures, public pressure had become so strong that nobody could or wanted to evade its turmoil. 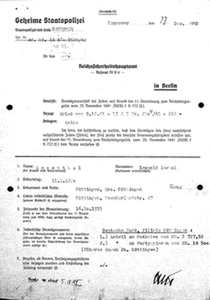 Already from early in 1933, Goettingen grain merchant Rosenthal was obstructed by Nazi followers. The company had been established in 1865 in Dransfeld, close to the University City. During the period of Jewish persecution, the business was managed by Leopold Rosenthal and his brother-in-law, veterinarian Dr. Walter Pohly. The annual profits, which in 1933 still amounted to approx. 20,000 Reichsmark, were obviously unacceptable to the NSDAP and the non-Jewish competitors. Though the example of grain merchant Rosenthal also demonstrates that the boycott sometimes came to nothing. Among rural customers, the measures were either initially ignored or they were simply unaware of them.

For this reason, the Nazi party ordered direct action in the Rosenthal "case" to achieve its boycott goals. After WWII, Goettingen lawyer Leopold Smend represented the surviving members of the Rosenthal and Pohly families in the compensation proceedings. In the early 1950s, he reported how the local Nazi party organisation proceeded in its anti-Semitic activities. Farmers from the Goettingen region had told the lawyer that the local Nazi farmers' associations and the district Nazi leadership had exerted considerable pressure on them as suppliers of the Jewish merchant. In this, even threats were issued against the suppliers. Thus, the business of the Rosenthal Company was deprived of goods supplies. Within less than two years, the profits plummeted to approx. 5,500 Reichsmark, and by 1938, their income was just about sufficient to pay the bills.7 Frequently, the question has been raised whether the boycott measures alone were responsible for Jewish bankruptcies. As these events were very close in time to the global economic crisis, the effects of the blockades and street terror were seen in relative terms directly after WWII. There can be no doubt about the fact that many smaller non-Jewish businesses also suffered severely during the crisis. However, business closures among non-Jewish proprietors, who had started into the Nazi era under the same economic conditions, were significantly less frequent than among their Jewish colleagues.